The Universities of Cape Town and Oxford, each the oldest universities in their countries, have long been partners in research to find innovative solutions to the problems of today, and the future. This was highlighted during a recent visit to UCT by a high-level delegation from the prestigious English university.

Effective collaboration between universities cannot be imposed from the top down: it must be led by research. This was the message Oxford University vice-chancellor Andrew Hamilton and his senior researchers brought to South Africa’s University of Cape Town last week.

The close relationship between the two institutions has created a range of research projects with the potential for tremendous social impact, UCT vice-chancellor Max Price said during the visit. These include research partnerships in malaria drug resistance, new tuberculosis vaccines, food security, and constitutional and customary law in Africa.

Oxford’s Hamilton said South Africa was a good place to look into topical global problems. “Collaborations thrive when there is mutual need, and South Africa offers a unique environment to study some of the greatest challenges facing us today,” he said. “We need now to encourage collaboration where it does not yet exist.”

UCT works and publishes with Oxford more than with any other British university. Their partnership in neurosciences is one of the most fruitful.

“We are particularly pleased that the launch of UCT’s Neurosciences Initiative coincides with this week’s visit by the University of Oxford,” Price said.

UCT’s Neurosciences Initiative at the Groote Schuur academic hospital brings together clinicians and researchers from a range of specialities, fostering collaboration in the treatment of a neurological disorders such as stroke, central nervous system infection and trauma.

The initiative is led by Prof Graham Fieggen, UCT’s head of neurosurgery. “The majority of people suffering from common neurological disorders live in low and middle-income countries,” he said. “There is a need to understand these disorders within the context of our own continent. We cannot simply import models from the global North.”

Oxford professor of neuroscience and co-director of the university’s Centre for Neuromuscular Science, Matthew Wood, who is also a UCT graduate and honorary professor, said neuroscience is central to society.

“Neurosciences are much broader than simply understanding the brain or understanding neurological disease,” he said. “Essentially it goes to the heart of who we are as human beings, and to many of the challenges that exist in society.” 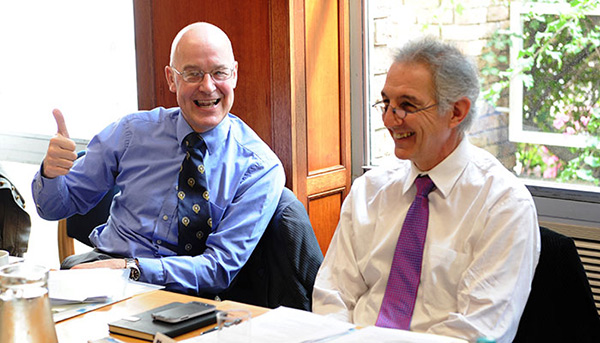 Managing chronic diseases over the phone

One of the projects showcased during the Oxford visit was the development of mobile phone technology allowing people in Africa to manage chronic diseases such as high blood pressure by themselves. Named the SMS-text Adherence Support, or Star, trial, it is part of mobile health development in Africa, and a collaboration between Oxford’s Institute of Biomedical Engineering and Primary Care Health Sciences and UCT’s Chronic Diseases Initiative for Africa (CDIA) project.

Mobile phones are highly effective in reaching patients across Africa. In a recent trial of an intervention to improve blood pressure control, over 95% of patients getting educational and supportive SMSes remained in contact with the project over one year.

Another project looks for insights into the behaviour of South Africa’s 1.2-million HIV-positive teenagers, to understand why their adherence to anti-retroviral treatment is low, and their use of contraceptives inconsistent.

The project, called Mzantsi Wakho, aims to get HIV-positive adolescents to adhere to antiretroviral treatment and access sexual and reproductive health services. It is the largest community-based study of HIV-positive teenagers ever conducted. From preliminary results, stigma still plays a powerful role in stopping teenagers from disclosing their HIV status to their partners.

Mzantsi Wakho is led by UCT’s Dr Rebecca Hodes, the director of the Aids and Society Research Unit at the Centre for Social Science Research and an honorary research fellow at UCT’s Department of Historical Studies, and Lucie Cluver, an associate professor of evidence-based social intervention at Oxford and honorary lecturer in UCT’s Division of Neuropsychiatry. The Departments of Health, Social Development, Basic Education and Women, Children and People with Disabilities were consulted on the project’s research design.

During the visit, Oxford vice-chancellor Hamilton added his voice to the debate on removing the statue of arch-colonialist and English mining magnate Cecil John Rhodes from the grounds of UCT.

“It’s a debate that should take place,” he told Primedia radio’s Kieno Kammies on Cape Talk. “It’s a debate for the students and faculty of the University of Cape Town – and South Africa in general – to go through, to work out for yourselves what place this figure who did many really quite terrible things during his lifetime.”

Oxford University administers the Rhodes Trust, a scholarship programme Rhodes set up to allow promising students from the former British Empire to study at his alma mater. 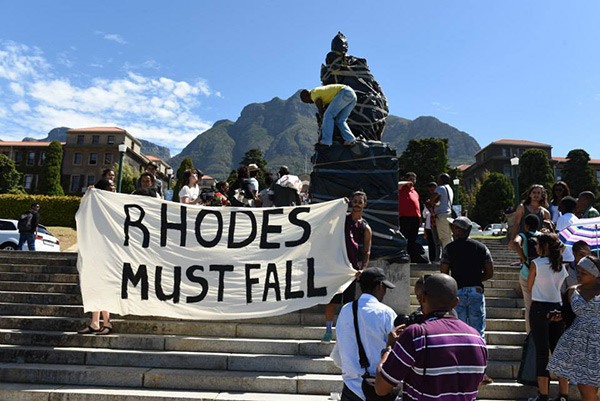 University of Cape Town students protesting for the removal of the statue of Cecil John Rhodes from its prominent position on the university’s grounds. (Image: UCT)

“Universities are an ideal place – they are an appropriate place – for that debate to take place,” Hamilton said. “Universities should be about the free flow of ideas, of strong, robust, even sometimes contentious debate about the interpretation of history, about the role of history in the development of modern society.”

But, Harrison added, “it’s not for me to comment on the place of Rhodes in contemporary South Africa”.

While his Oxford counterpart stayed neutral on the issue, UCT vice chancellor Price said the statue should be removed, as he felt the anguish it caused black students.

“I feel the need to apologise on behalf of the university for the kind of pain they’re experiencing for that frustration,” he told Eyewitness News.