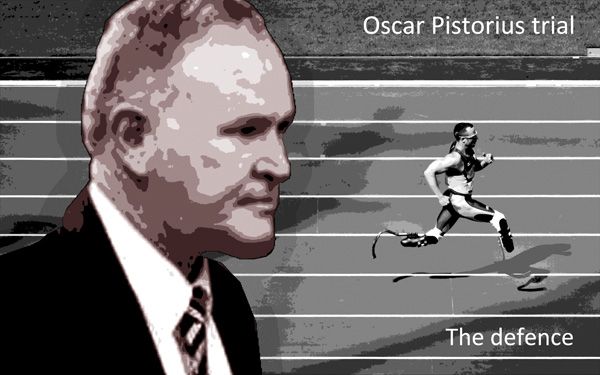 Roux, an advocate for more than 30 years, is a formidable legal eagle, known for wearing witnesses down. In Pistorius’s bail application in the weeks after the Steenkamp’s death, Roux grilled police detective, Hilton Botha, who cracked under relentless questioning, admitting that his facts were doubtful, and that Pistorius would not be a flight risk. Pistorius’s bail was secured at R1-million and Roux convinced the court to relax some of its strict bail conditions a month later.

The first witness to be called in the Pistorius trial, Michelle Burger, took the stand for a day and a half, and withstood repeated grilling by Roux, bravely sticking to her story under pressure. Subsequent witnesses have endured his persistent questioning, with Pistorius’s former girlfriend, Samantha Taylor, breaking down in tears twice during her testimony, with the court having to have a recess to allow her to recover.

He has had some high profile clients, defending South Africa-based businessman, Dave King, who had had the highest unpaid tax bill ever, at R2.3-billion. The bill was reduced to R700-million. Roux also represented Johannesburg Consolidated Investments chairman, Brett Kebble, now deceased, on charges of tax evasion. The charges were withdrawn in 2007.

Mannie Witz, an advocate with the Bridge Group at the Johannesburg Bar, says of Roux: “He is a very experienced criminal lawyer, and quite a likeable fellow.” Witz says he has worked with Roux over the past 35 years. Roux has been a South African Police Services advocate for many years, and still takes on the bigger criminal cases for them. “He is very, very professional, and very competent,” adds Witz.

Roux is a hardworking but private person, says Witz, and a gentleman and a family man. “He is always very well prepared, and a very decent guy.”

Roux is a member of the Advocates Group 21, a professional body of 101 advocates who practise in the High Courts and other courts of South Africa and neighbouring countries.

“Our members are committed to the highest standards of a professional and ethical legal practice, and are equally committed to transformation initiatives internally, and at the Johannesburg Bar, to ensure that the practice remains highly esteemed and legitimate,” indicates the organisation’s website.

Members of the group practise in all the fields of law traditionally dealt with by advocates, including constitutional law and human rights, labour law, criminal law, matrimonial matters, banking law, company law, liquidations, aviation law and intellectual property. Services rendered include litigation, mediation and arbitration, attending enquiries and commissions, and appearing in all forums generally permitted by the rules of conduct set by the Bar, including as the presiding officials at hearings.

“The Group has actively sought to transform the bar and to help redress the imbalances of the past. It has a dedicated fund aimed at ensuring that new and previously disadvantaged members get access to quality work and clients.”