Former South African president Nelson
Mandela and US First Lady Michelle Obama
read from his authorised book of
quotations, which will be launched on 27
June 2011.
(Image: Nelson Mandela Foundation) 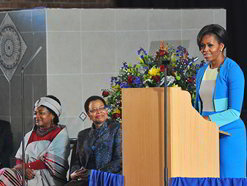 Obama speaking at the Regina Mundi
church in Soweto. Seated next to her is
Graca Machel (middle) and Baleka Mbete.
(Image: GCIS)

US First Lady Michelle Obama delivered a stirring speech to young women at the world-famous Regina Mundi church in Soweto on 22 June 2011, encouraging them to take action and make a difference in society, thus shaping a new generation of leaders on the continent.

Obama is on a six-day official visit to Africa focusing on young leadership, education, health and wellness. This is her second solo trip abroad as first lady.

Her keynote address in Soweto was attended by a US-sponsored forum of more than 75 young women from across sub-Saharan Africa who are involved in social and economic initiatives in their respective countries. They range in age between 16 and 30.

In her speech Obama drew on the history of Regina Mundi, which means Queen of the World in Latin, to pay tribute to leaders of the anti-apartheid movement in South Africa and the civil rights movement in the US, urging the young women in the audience to follow their example.

“That is the legacy of the independence generation, the freedom generation. And all of you – the young people of this continent – you are the heirs of that blood, sweat, sacrifice and love.”

The Catholic church, the largest of its kind in Soweto, played a pivotal role in the liberation movement in South Africa, offering refuge to freedom fighters when political meetings were banned elsewhere.

Obama spoke out strongly about women’s rights in her address, saying the young leaders of the forum should ensure that women were no longer “second class citizens” and that girls were educated in schools.

The new breed of young women leaders on the continent could also be the one that overcomes the difficulties associated with HIV/Aids, Obama added.

Without notes, Obama spoke for 40 minutes with rousing conviction, eloquence and grace – showing she’s every bit as powerful an orator as her husband.

In closing, she used his famous campaign slogan from 2008 to inspire confidence in the women and urge them to be proactive about the issues she discussed.

“If anyone ever tells you that you shouldn’t or you can’t, then I want you to say with one voice – the voice of a generation – you tell them, ‘yes, we can’.”

During her stay in Gauteng, Obama also met with Nelson Mandela at his home in Houghton, Johannesburg, after receiving a personal invitation from him. Her daughters Malia and Sasha, who are accompanying her on the trip, also got the chance to meet and spend time with the icon.

On the same day as the Mandela meeting, the First Lady visited President Jacob Zuma’s second wife, Nompumelelo Ntuli Zuma, in Pretoria and toured the Apartheid Museum in Johannesburg.

The next stop is Cape Town, where a meeting with Archbishop Emeritus Desmond Tutu and a trip to Robben Island is scheduled, and then Botswana, where the Obamas will spend time at a private game reserve.