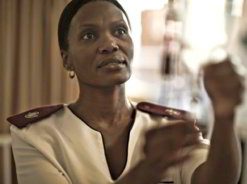 The success of the first year of the nursing
recruitment programme has led to its
extension for the 2012 training intake.
(Image: Institute for Int’l Medicine)

Those interested have just one month to get their applications in. The deadline is 29 April 2011, after which all candidates who meet the academic requirements will be assessed.

The batch of candidates with the most potential will then be referred to the Gauteng Department of Health for the final selection phase of interviews.

According to Mishack Magakwe, the provincial labour department’s spokesperson, the partnership between the two departments will see more than 800 unemployed persons enrolled in a four-year nursing diploma course that encompasses theoretical and practical training in different hospitals around Gauteng province.

Registered unemployed people are screened against set criteria issued by Gauteng’s Department of Health, and those who pass the initial screening are further assessed by Department of Labour career counsellors to determine their potential.

The project has been in development since January 2010, when the two government departments held their first joint meeting. The Department of Health gave its approval to recruit students in April 2010.

Because of the project’s initial success, the Department of Labour was requested to recruit again for 2012’s intake.

Last year’s recruitment saw 742 successful candidates embarking on the four-year nursing diploma, which commenced in January 2011. Students receive a salary while in training.

The project aims to assist unemployed persons registered in the Department of Labour’s database to access placement opportunities.

The process of registering unemployed persons, subsequent recruitment and assessments, as well as registration of vacancies, is offered at 26 departmental labour centres in the Gauteng area. Labour offices are open from Mondays to Fridays from 7:30am – 4pm and their services are offered free of charge.