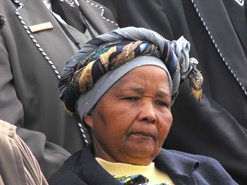 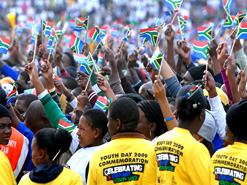 Thousands of young people stand to
benefit from the formation of the National
Youth Development Agency. 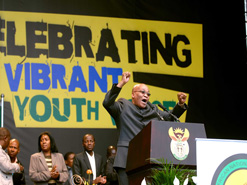 Celebrations marking the 33rd anniversary of the 16 June 1976 Soweto youth uprisings were marked this year by the launch of the National Youth Developmental Agency (NYDA).

The NYDA was formed following the merger of two of South Africa’s youth bodies – the National Youth Commission and the Umsobomvu Youth Fund.

The agency has been tasked with initiating youth development programmes, in line with the National Youth Policy adopted at the beginning of 2009.

On 16 June, President Jacob Zuma formally announced the formation of the agency during a Youth Day commemoration event at Hunterfield Stadium in Katlehong, a township east of Johannesburg.

In his address to thousands of youths gathered at the stadium, Zuma said that youth development was a key focal point for government and that the agency would serve as the driving force to implement its plans. “The agency has a lot of work to do. It has to develop an integrated youth development plan and strategy without delay.

“It must initiate, design, coordinate, evaluate and monitor all programmes aimed at integrating the youth into the economy and society in general,” Zuma said.

The agency is expected to build partnerships with various government departments, with the view of creating youth programmes within each sector of government.

According to Zuma, the ability of young people to obtain work is based on their skills development, whether formal or informal.

To this end, the president said during this address the NYDA would work closely with schools.

“We have prioritised education over the next five years. Therefore, the creation of an environment, which supports learning, skills development, and economic participation of the youth, will be one of the primary tasks of the agency.”

Zuma also voiced his concern over the high number of youths unable to get into tertiary institutions, due to financial constraints.

“We have taken a position that all our youth must have access to education up to tertiary level. We urge the agency to assist government in promoting that all young people stay in school until they finish matric.

“The formation of the Department of Higher Education is also aimed at putting a particular focus on the acceleration of skills development of young people in higher education,” Zuma said.

The president’s ideas on the importance of the youth agenda was set out by his office earlier this month, as June is officially recognised as Youth Month in South Africa.

Minister in the president’s office Collins Chabane announced that this month will be used to revive youth programmes that have been on the back burner.

Remembering the legacy of ‘76

This year, Youth Day was commemorated under the theme “Celebrating a Vibrant Youth Voice.”

The day started with Zuma attending a wreath laying ceremony at the Hector Pieterson memorial in Soweto.

The shooting of Hector Pieterson was made famous by a photograph taken by Sam Nzima, who covered the event on that fateful day.

Pieterson was rushed to Nzima’s car and taken to a local hospital where he was pronounced dead on arrival.

The students, from various schools in Soweto, took to the streets to protest against the use of Afrikaans as the medium of instruction.

Afrikaans was the language of choice of the apartheid government.

The 1976 march was organised by the South African Student Movement, and was meant to end at the Orlando Stadium, where students were expected to meet with education authorities to highlight the plight of their learning conditions.

During the march police started firing live rounds of ammunition at the students, who at that time were carrying placards, singing protest songs and toyi toying (a type of protest dance).

When police opened fire and threw tear gas at the students, they ran for cover, some throwing stones at the police.

Speaking to BuaNews, a government online news service, during the wreath laying ceremony, Hector Pieterson’s mother Dorothy Molefi Pieterson said she has come to deal with the memories associated with the uprisings.

“I have put the Soweto uprising in my long term memory and I have come to terms with its bitter memories.

“I have also forgiven the architects of the apartheid regime for the loss of my son, but I will never forget that fateful day.”

Pieterson urged the youth of today not to allow her son’s death to be in vain.

“If the young generation can come together like my son and several others did in 1976, singing one song, this country will be rated amongst the best in the world.”