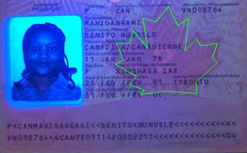 Security measures similar to this Canadian
passport will now be used to make the
South African passport safer.
(Image: Security-int)

As part of the Department of Home Affairs’ turnaround strategy, from 8 April 2009 South Africans applying for a passport will receive a document with improved security features, making it more difficult to forge.

Talking to the media on 2 April, Department of Home Affairs Minister Nosiviwe Mapisa-Nqakula said the document will see a significant improvement in the security of the South African passport.

“One of the major differences between the old and new passport is the pure polycarbonate data page that replaces the current security paper data page with its overlay film.

“Personal data will in future be laser-engraved into the data page instead of being printed on the overlay film,” she said.

The introduction of the new document is part of a strategy to overhaul the department’s system, with the emphasis on increased efficiency and security.

In addition, the department intends on dealing with the backlog challenges, which is currently slowing down the issuing of birth, marriage and death certificates.

According to Mapisa-Nqakula, the home affairs team is hard at work in dealing with the influx of refugees.

“Another area in which huge improvements are balanced by remaining challenges is the issue of refugees.

“Despite the far-reaching improvements we have made to our processes, the fact is that our systems were not designed to deal with the number of people entering our country at the moment,” the minister said.

Mapisa-Nqakula said with the help of the new online verification system, when passports are produced at immigration points, the fingerprints that appear on them would be checked against those that appear on the online system to verify its authenticity.

To this end, the department is expected to open the Tshwane Interim Refugee Reception center during April.

One of the main contributing factors that prompted the department to make the move towards a new, safer passport was the high number of fraudulent South African passports being used to enter countries abroad.

In the United Kingdom, the situation deteriorated to a point where that country’s government enforced a visa requirement for South African visitors to the country, who previously did not need one.

A statement issued by the British High Commission highlighted its concern at the ease with which illegal South African passports were being made available.

“[It is a] big concern and an unacceptable threat to the United Kingdom’s borders with regards to illegal migration and national security.”

Since the beginning of March, all South Africans without a previous UK stamp in their passports are required to obtain a visitor’s visa from the UK High Commission. This system will be in place until the issue of fraudulent South African passports is reviewed at a later stage.

Despite home affairs’ new passport regulations, the UK government says the updated documents will not necessarily change their minds about the visas.

“We are very happy with the steps the South African government is taking to improve its passport but it doesn’t mean that the visa requirements will be reconsidered soon,” said Russ Dixon, the spokesperson for the British High Commission.

Dixon says the waiver to the visa requirement would be considered only at a later stage.

She said with the help of the new online verification system, when passports are produced at immigration points, the fingerprints that appear on them would be checked against those that appear on the online system to ensure a match.

Meanwhile, the department’s counter-corruption unit will continue to work in partnership with the South African Police Service and National Intelligence Agency to identify staff members within the department involved in corruption and fraud.

So far, 66 home affairs officials were arrested and a further 18 suspended on allegations of fraud during the 2008/2009 financial year.