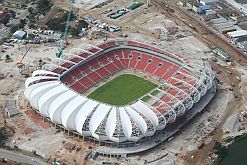 The Nelson Mandela multi-purpose
stadium. The municipality’s listing as one
of the most intelligent communities in the
world will enhance its status as a 2010
host city. (Image: Nelson Mandela Bay)

The Eastern Cape’s Nelson Mandela Bay municipality has made it onto the 2009 list of the world’s 21 most intelligent communities. The list is issued annually by the Intelligent Community Forum (ICF) on the basis of a community’s capacity in and innovative use of broadband.

African communities are starting to make their presence felt in the global broadband arena. Nelson Mandela Bay follows Cape Town’s feat – in 2008 the Western Cape capital was the first and only African city to make it to the Smart21 list.

The municipality, which includes Port Elizabeth and the nearby towns of Uitenhage and Despatch, is home to 1 200 000 citizens in around 289 000 households.

It was singled out with 20 other communities from 12 nations on four continents, among them two counties and two multi-city metropolitan areas. Nelson Mandela Bay is the only African entrant to have been thus honoured in 2009.

ICF development director Louis Zacharilla lauded each nominee for their efforts in improving their environment through innovative broadband applications.

“The ingenuity of these communities is exemplified in their investments in the future of the young, the growth and progress of job-creating businesses, and economic security,” he said at the announcement. “An overarching theme of the 2009 honourees has been the dedication to putting people first and building a ‘talent inventory’ that will thrive with technology and innovation.”

Nelson Mandela Bay is the acknowledged hub of the automotive industry in South Africa, an achievement commended by the ICF in its citation. The municipality is also investing into information and communications technology (ICT) with the goal of establishing an ICT sector built around call centres and ICT outsourcing. This will serve to bridge the current inequality in education and income.

The recently developed Nelson Mandela Bay Technology Hub is a project that focuses on providing support to small- and medium-sized businesses in ICT and related industries. An initiative of the Eastern Cape Development Corporation, the Technology Hub plays a crucial role in the growth of these businesses in the province’s burgeoning ICT sector.

The municipality has also developed a detailed strategy for the implementation of wireless and fibre-to-the-premises broadband, an initiative which will further narrow the digital gap. Fibre-to-the-premises is a type of network architecture where fibre optic cable is run right into the client’s premises, in contrast with traditional methods which use copper for last mile delivery.

The introduction of an e-government programme in 2008 has helped to raise the standard of services in the municipality. The scheme consists of four focus areas – government to citizen; government to government; government to business; and internal efficiency and effectiveness.

Among the recently implemented e-government solutions is the full computerisation of six community libraries, complete with office packages as well as public internet and email facilities. All municipal departments are now connected with a cost-saving 100Mb wireless network, and work more efficiently with an electronic document management system.

The municipality’s traffic control system is to be improved, with new traffic signals and CCTV screens and cameras. The new bus rapid transport system, which is expected to form the core of the public transport system up to 2020 and is currently under construction, will also be accommodated with priority at traffic signals for buses.

The ICT panel concluded that the Nelson Mandela Bay approach is “worthy of imitation, because it creates a bold strategy and high-quality plan but sets realistic expectations for achieving it within the community’s means”.

The ICF’s Smart21 list is part of its annual Intelligent Community Awards programme, an initiative that identifies the most technologically-savvy communities on the planet. An intelligent community is defined by the ICF as being a community, irrespective of its size or composition, which views bandwidth as an essential resource, one that is vital to economic growth and public welfare.

Nominations are received from hundreds of communities of all sizes and on all continents. Once the 21 smart communities for the year have been named, the list is further shrunk to a shortlist of seven, from which the world’s most intelligent community is selected.

No African nominee has yet made it to the final seven, but in light of the fact that two years ago an African city had never been named at all, it is surely just a matter of time. The 2009 winner is Stockholm in Sweden.

Nomination to the elite Smart21 group is considered a great honour, as well as a step towards wider recognition as an intelligent community with a bright future in the ever-growing broadband economy. The Smart21 initiative is now in its fourth year of existence.