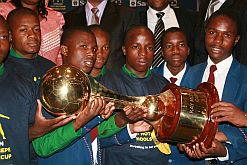 The youngsters stand to generate R1-million
for their schools. 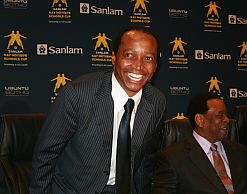 Tycoon Patrice Motsepe founded the
competition in honour of his late mother. 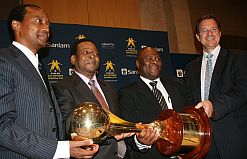 The development of footballers at school level in South Africa has received a major boost with an injection of a R30-million (US$3.9-million) sponsorship into an annual tournament.

Mining mogul Patrice Motsepe and partner in the venture Sanlam announced the five-year sponsorship of the Sanlam Kay Motsepe Schools Cup in Johannesburg on 4 January.

The tournament, formerly known as the Kay Motsepe Cup, is Motsepe’s brainchild, founded through the Motsepe Foundation in 2004 in honour of his late mother Kay Motsepe.

“We are trying to get people to take schools’ football very seriously,” Motsepe said.

About 4 000 high schools from all nine South African provinces are expected to participate in the competition. The matches will kick off on 20 February and will proceed to regional knockouts.

Winners from the regional knockouts will slug it out with other schools in their respective province for the honour of representing the province in the national finals.

The national finals will feature 18 teams – two from each province – and will take the form of a mini-tournament played over four days after the 2010 Fifa World Cup.

The champions will pocket a staggering R1-million ($128 700) for their school. This is a considerable increase from last year’s R500 000 ($64 400) won by Mokopane Academy of Sports, a Limpopo school coached by former Orlando Pirates striker Andries Sebola.

“This is the dawn of a new era for football in our schools,” said Sasfa president Mandla Mazibuko. “There are thousands of schools waiting for that trophy and the whopping prize-money of R1-million. We have never let this tournament down.”

The South African Football Association (Safa) is convinced that such developmental investments will only bring benefits, supplying it with top footballers for the national team Bafana Bafana.

“Surely we will be beneficiaries. We want to reap the crop as Safa,” said its president Kirsten Nematandani. “This investment is historic indeed.”

All schools are welcome

The tournament is open to all high schools in South Africa, from public schools to private and independent schools.

“We want the private schools to play football with our schools in Soweto and KwaMashu,” said Motsepe, who also owns premier league team Mamelodi Sundowns.

“We want all schools to participate,” he added. “There’s so much talent amongst our people, we just need to nurture it.”

Motsepe believes that it’s tournaments like the Sanlam Kay Motsepe Schools Cup that contribute to building a better South Africa. “There’s a unique role that football can play in building our country.”

“We strongly share the Motsepe Foundation’s belief that soccer is a nation-builder,” said Sanlam group CEO Johan van Zyl, “and that the growth of soccer, through the development and enhancement of youth football and life skills, will contribute immeasurably to this country’s future.”

Reaching out to football legends

South Africa’s football legends will play a meaningful role throughout the tournament. The football masters, mostly from the 1960s to the 1980s, will coach the youngsters and facilitate training clinics for them.

The Kay Motsepe sponsors have allocated R1-million ($128 700) to ensure that the legends are able to do their work without hindrance. “We want every [participating] school to be linked to a legend,” said Motsepe.

The national Department of Education expressed support for the tournament, one of many competitions involving schools in South Africa. “We do recognise the importance of sports in our schools,” said the department’s director-general Duncan Hindle. “[This tournament] will make a big difference in our schools.”

“We must convert every school in South Africa, in towns, in the rural areas and townships, into centres of football,” Motsepe said.