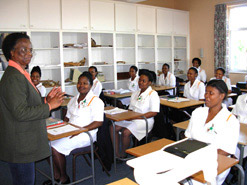 The grants will help trained nurses to
upgrade their nursing education.
(Image: NAACP)

The training of nurses in South Africa has been boosted by a cash injection of R70-million (US$7-million) over the next four years.

Atlantic Philanthropies, an international organisation aimed at improving nursing education and the quality of healthcare delivery in South Africa, will be offering the bursaries to qualified nurses who want to pursue further studies in the field and go into areas of specialisation.

Health minister Barbara Hogan says the programme will bring back much needed confidence in the sector. “Through this programme, South African nursing will compete internationally, attract the best candidates for the profession and encourage nurses who have moved abroad to return to the country.”

Atlantic Philanthropies is focussed on improving the health of South Africans by increasing the number of health professionals who can deliver quality and professional healthcare.

Seven universities across the country will benefit from this scheme.

From 2009 to the end of 2012, the universities will use the bursaries to improve and transform nursing education in several key areas including research, clinical care, maternal, child health, community health, and critical care nursing.

Smaller grants of R1-million ($100 000) will be awarded to three other universities. These are; the North West University, Stellenbosch University and the University of KwaZulu-Natal.

All seven grants will be issued through the organisation University Based Nursing Education South Africa’s programme.

The funds will then be managed by Inyathelo-The South African Institute for Nursing Advancement.

Inyathelo is a non-profit trust that promotes philanthropy and strengthens the NGO sector and institutions such as universities.

The Adelaide Tambo School of Nursing Science at the Tshwane University of Technology will use the money for nursing services to the community of Shoshanguve, a township east of Pretoria.

Extension 12 and 13 of the township will specifically benefit by means of mobile clinics offering primary health care, cancer and palliative care, management of lifestyle diseases, and early childhood development.

Meanwhile, the Department of Nursing Sciences at the University of Fort Hare will introduce new doctoral and research masters programmes to the post-graduate degrees offered at the university.

In conjunction with the grant, Fort Hare will also commit an additional R40-million ($400 000) of its own to build a centre of nursing excellence, designed to develop post-graduate programmes.

The school of nursing at the University of the Free State will establish a unique Virtual Health Teaching and Learning facility. This will provide hands-on clinical training for students, and volunteers from the local community, to play the roles of people with specific illnesses and disorders.

The university will also use part of the grant to establish a new unit for continued professional and research capacity development.

The School of Nursing at the University of the Western Cape plans to create a centre for teaching and learning, with the aim of increasing research capacity and to provide academic support for postgraduate students.

Nursing is one of South Africa’s most prominent professions within the medical sector. There are a number of established organisations, which cater to the needs of nurses in the country.

The objectives of SANC include promoting health standards for South Africans, controlling and exercising authority in respect of all matters affecting the education and training of registered nurses, midwives, and enrolled nurses, acting as a liaison between the education and training institutions and the working environment of nurses as well as advising the minister of health on matters falling within the scope of the Nursing Act.

The Democratic Nursing Organisation of South Africa (DENOSA) is also an organisation which works within the areas of advocacy and promoting the training of nurses at the highest standard.

Denosa currently represents 65 000 nurses and nursing staff in both the public and private sector. The organisation is very instrumental in speaking out on issues affecting nurses.

It regularly addresses government on issues of nurses’ salaries, the working condition of their members and the speedy appointment of nurses at health institutions.

Other organisations operating in South Africa include the Association of Nursing Agencies of South Africa (ANASA).

ANASA was establishment to represent nursing agencies in November 1994. It has now grown to represent over 50 agencies.