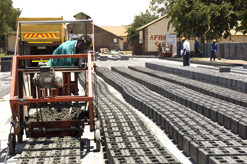 Building skills will be taught to those
taking part in the EPWP. 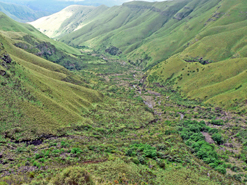 The environment stands to benefit
From the different environmental projects. 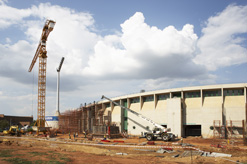 Construction projects will use trained
locals as part of the public works
programme.

In his state of the nation address in 2003, President Thabo Mbeki announced that government would be launching an ambitious five-year campaign in 2004 to alleviate poverty and unemployment in South Africa. This took the form of the Extended Public Works Programme (EPWP) – an inter-departmental project focusing on skills development.

The programme consists of short-to-medium term measures to curb poverty and unemployment. From 2004 to 2007, 950 000 jobs were created and government projects that by 2009 it will have generated 1.3-million jobs.

The EPWP is one of government’s initiatives to ensure that the large number of unskilled and jobless South Africans are drawn into the employed sector to benefit fully from economic development. The countrywide scheme targets the areas of infrastructure, environmental, social, and economic development.

This involves recruiting and training the unemployed to become involved in labour-intensive projects such as upgrading rural and municipal roads, pipelines and storm-water drains. Local community members living near in such developments are employed by contractors to carry out the work.

As part of the project, about 500 contractors have already received government training through the Construction Education and Training Authority, ensuring they have the necessary skills to build the infrastructure.

About 37 000km of roads, 31 000km of pipelines, 1 500km of storm water drains and 150km of urban pavements are to be constructed as part of the programme. About 750 000 unemployed local community members will participate in projects. All those employed to work on these projects will receive training funded by the Department of Labour.

The environmental component of the EPWP includes the Working for Water scheme, which creates employment opportunities in the public environmental sector. It also involves employing people to work on conservation projects such as the Department of Agriculture’s Land Care programme; the Department of Environmental Affairs and Tourism’s People and Parks, Coastal Care, Sustainable Land-based Livelihoods, Cleaning up SA, and Growing a Tourism Economy programmes.

It also includes the Department of Water Affairs and Forestry’s Working for Water, Working for Wetlands, and Working on Fire programmes.

This programme will result in 40 rehabilitated wetlands, 20 fire protection associations, the cleaning of 700km of coastline, 10 000ha of rehabilitated land, 32 waste management programmes and 150 historical and community tourism projects. It’s expected that this sector will have created employment for about 200 000 people by the end of 2009.

This sector creates work opportunities for individuals through community-based health and social welfare programmes. These include home-based healthcare for those with HIV/Aids, as well as an early childhood development initiative. The departments of health, social development and education facilitate these programmes. The home-based care programme has been devised as a cost-effective substitute for a significant portion of HIV/Aids-related hospital care.

The EPWP plays a critical role in the government’s bid to deliver holistic HIV/Aids and tuberculosis related services. Early childhood development is the process by which children from birth to nine years old are nurtured in appropriate environments so they grow and thrive physically, mentally, emotionally, spiritually, morally and socially. The aim of the programme is to skill 19 800 practitioners over five years to care for vulnerable children.

The Department of Trade and Industry has been tasked with coordinating this sector and help people gain skills in small business development. In a bid to help those involved become economically sustainable, Cabinet has approved about 3 000 learnerships for the five-year period.

The learnerships involve teaching young entrepreneurs the basics of running a business and how to grow a viable venture. It is assumed that each of these entrepreneurs will employ an extra three people, brining the total number of learnership beneficiaries to 9 000.