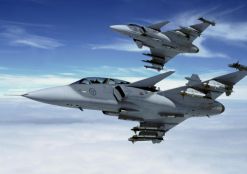 South Africa will receive the first group of student fighter pilots of the Gripen Fighter Weapon School in late 2013 after Swedish company Saab confirmed its intentions to fund the project.

The South African Air Force (SAAF) base in the Overberg in the Western Cape will be the training ground for the new recruits.

Magnus Lewis-Olsson, president of Saab South Africa, said the first group of pilots will be chosen from the five countries where the Gripen is currently being used.

“There is a need to establish an advanced training centre for experienced Gripen pilots with the aim to increase their operational capabilities,” he said. “There is also an opportunity for the pilots to operate in an environment different from their own and a chance to train in a region that mirrors a realistic future potential deployment scenario.”

Saab, which makes the Gripen, has been in existence for 75 years, but has only been operating in South Africa for the last 13.

According to Saab, the extensive airspace over mountain ranges, deserts, and the Atlantic and Indian oceans provides the perfect space for fighter pilot training.

The course will run for two months and will focus on multiple aspects, with the advanced airborne exercises to be mixed with academic and survival training in an African context.

“The school will increase our understanding between the different Gripen operators and our own efforts to create a common software baseline as the pilots will cross reference their experience of Gripen,” said Lewis-Olsson.

New threat scenarios will also form part of the training, and these will help increase the students’ operational capabilities by providing experience in tactical behaviour that differs from their national standard operating procedures.

“The school will teach pilots the skills they need before they go on a major exercise, or into combat, and in a few years we’ll get into more advanced air-to-air training with some sort of aggressor aircraft.”

He added that although the school hopes to take in a few students for its first course – six or seven – if this is successful the number could later grow to 20.

“We could also offer the facilities for other uses like the Nato Tactical Leadership Programme for instance,” said Lewis-Olsson.

According to Saab, the SAAF became the first export customer for the Gripen system in 1999, receiving the first aircraft in 2008.

The agreement comprised 17 single-seater and nine two-seater aircraft, together with a comprehensive industrial cooperation programme that includes skills training and technology transfer.

The aircraft’s cockpit is equipped with a Saab Avitronics EP-17 electronic display suite, along with three multifunction displays and a wide-angle head-up display.

Saab Aerospace, together with state-owned Denel and UK defence systems supplier BAE Systems, went further to develop an integrated helmet-mounted display system for the South African version of the Gripen, known as the Cobra. This is a binocular system that displays both air-to-air and air-to-ground weapons symbology, as well as basic flight data.

Major Catherine Labuschagne of the SAAF completed her maiden solo flight in the Gripen Jas 39C in October 2010, becoming the first woman fighter pilot ever to fly the supersonic aircraft.