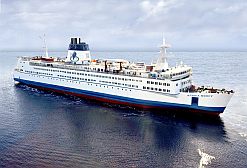 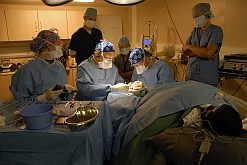 About 7 000 surgical procedures are
performed on the African Mercy every
year. (Image: Mercy Ships Germany)

A patient at the Sabona Eye Centre in
Queenstown. (Image: Hollows Foundation) 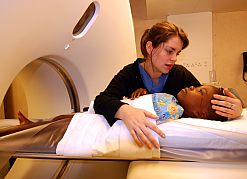 Mercy Ships Southern Africa, through its five-year Mercy Vision project, is training ophthalmologists, building capacity in the public eye health system, and helping people whose lives have been changed by cataract blindness.

John Rae, director of the organisation’s Southern African chapter, says the organisation is currently active mainly in the Eastern Cape. This is South Africa’s poorest province and one that is in desperate need of better infrastructure and access to basic services, including healthcare.

Mercy Ships Southern Africa (MSSA) works with the Eastern Cape provincial government to make eye health services more accessible to the poorest of the poor in the province.

“Our objective,” says Rae, “is to raise the level of eye healthcare in the province, and accelerate the number of cataract surgeries performed at the new Sabona Eye Centre in Queenstown.”

Sabona, derived from the Xhosa word meaning “to see”, opened its doors in February 2009. The centre is a joint project between the Eastern Cape provincial health department and the humanitarian Fred Hollows Foundation, which works to address avoidable blindness around the world.

Statistics supplied by the Hollows Foundation reveal that there are over 225 000 blind people of all ages in South Africa. Of these, 66% have lost their sight to cataracts. There are some 35 000 cataract-blind people in the Eastern Cape alone, and the number is growing, while the waiting period for eye surgery at government hospitals stands at about two years.

The World Health Organisation has set a target of 2 000 to 3 000 cataract operations per million people per year by 2020. The Eastern Cape, with its 7-million residents, requires an average of 17 500 procedures per year to meet this goal.

The province’s government hospitals perform up to 3 000 operations a year, short of the target by 14 500 procedures. This figure excludes the current backlog of 35 000.

This condition affects not only the patient, but the family too. In most cases the blind person is the caregiver of the family and if he or she is unable to look after the younger ones, it usually means that a child has to drop out of school and take over. The child is deprived of a formal education and misses out on important social development.

However, the number of ophthalmologists in South Africa stands at a woeful 275. Of these, said Rae, 235 are in private practice, leaving 20 qualified specialists to tend to hundreds of thousands of people. “And half of those are lecturing at universities,” adds Rae.

This is where the Mercy Vision project, which runs between March 2008 and December 2012, is making a difference. Over the project’s five-year span, it is hoped that up to 60 000 people will receive specialised surgery, with at least 95% of those experiencing a marked improvement in vision.

Mercy Vision also plans to raise the standard of professional expertise by sending South African eye surgeons to receive specialised training on board the largest civilian hospital ship in the world, the Africa Mercy.

A former Danish rail ship, the Africa Mercy travels the length and breadth of the continent bringing healing to those who may otherwise never have access to top-quality health services. Over 7 000 operations are performed every year on this marvellous floating hospital.

The Africa Mercy is the organisation’s fourth and largest hospital ship – it has six cutting-edge operating theatres, an ICU unit, x-ray facilities, CT scanner, beds for 78 patients in its ward and berths for 484 volunteer crew members and their families. It also has a school, supermarket, library, day care centre, and its own Starbucks Cafe.

Using techniques currently available in South Africa, ophthalmologists at Sabona can perform between five and 10 procedures per day. Aboard the ship, surgeons perform between 30 and 40 operations per day. The ship’s procedure is equally effective, says Rae, but is quicker and cheaper.

The first South African doctor is presently on the Africa Mercy. Doctors will return to Sabona after their tenure on board, to perform eye surgery at the rate of at least 20 procedures per day for a combined 12 months of the year. The fourfold increase in procedures means that an additional 3 300 people every year will regain their sight.

The Africa Mercy spent its inaugural term of service in war-torn Liberia, and is currently docked in Cotonou in the West African country of Benin. It is so badly needed here that it will remain in Benin for the rest of the year.

However, there is a chance that within months it will come to East London in the Eastern Cape to undergo engine replacement. The ship’s engines are 30 years old and are not only fuel-hungry, but they cause a detectable vibration that disturbs patients and may interfere with surgical procedures.

The US$4-million (R30-million) engine replacement will entail a three-month stay in dry dock, and Rae believes the ship can be more productive during that time in South Africa, where hundreds of people could benefit. This is the only available window for a South African visit in the near future.

“The other alternative is to send Africa Mercy to Rotterdam, but there she will sit idle for the entire three months.”

A decision is expected in August.

Eventually MSSA would like to partner with government in other South African provinces, says Rae, especially Limpopo and Mpumalanga. “We don’t want to compete by setting up our own private hospitals, but rather, we would continue to help to improve the service at existing hospitals in the government sector.”