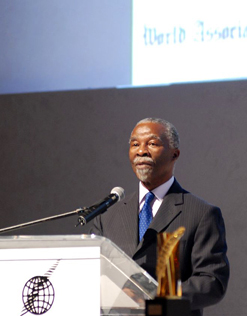 Thabo Mbeki speaking at the opening
ceremony of the World Association of
Newspapers conference in 2007.

South African President Thabo Mbeki announced his resignation on Sunday night, following a request that he do so by the National Executive Committee (NEC) of the ruling African National Congress (ANC) on Saturday.

The NEC’s decision to “recall” the president is widely seen as a result the 12 September ruling by Pietermaritzburg High Court Judge Chris Nicholson that Mbeki, or members of his executive, might have interfered with the National Prosecuting Authority (NPA) decision to charge ANC President Jacob Zuma.

Judge Nicholson suggested there was an inappropriately close relationship between the NPA heads and the justice ministry, and that Mbeki and the Cabinet should take responsibility.

“I would like to take this opportunity to inform the nation that today I handed a letter to the Speaker of the National Assembly, the Honourable Baleka Mbete, to tender my resignation from the high position of President of the Republic of South Africa, effective from the day that will be determined by the National Assembly,” Mbeki said in a televised address.

He will remain in office until the National Assembly accepts his resignation and determines the date of his departure.

“After careful debate and discussion the NEC decided to recall comrade Thabo Mbeki. This was one of the most difficult decisions the NEC has ever had to take in the history of the ANC.

“We fully understand that the decision comes with a degree of pain to comrade Mbeki, his family, friends, members of the ANC, ordinary South Africans and members of the international community with whom we interact.

“Comrade Mbeki has devoted decades of his life to the ANC and our country. The decision to recall him was not taken lightly, but it has to be taken in the interest of making the country move forward.”

Mbeki has been a member of the ANC for 52 years, having joined what was then a liberation movement at the age of 14. He was appointed deputy president after the ANC won South Africa’s first democratic elections in 1994, and succeeded Nelson Mandela as president in 1999.

He was due to stand down after his second term of office after South Africa’s next elections in April 2009. According to the country’s Constitution, individuals may not hold the presidential office for more than two terms.

“The transition will be managed with care and precision,” Zuma said. “We will announce the name of our candidate in Parliament at an appropriate moment. We have in cabinet many experienced ministers, including the deputy president of the ANC, Kgalema Motlanthe. I am convinced that if given that responsibility, he would be equal to the task.”

The marathon of public office

Much of Mbeki’s speech last night was spent on thanking his party and his people.

“I would like sincerely to thank the nation and the ANC for having given me the opportunity to serve in public office during the last 14 years as the Deputy President and President of South Africa,” Mbeki said.

“Indeed the work we have done in pursuit of the vision and principles of our liberation movement has at all times been based on the age-old values of Ubuntu, of selflessness, sacrifice and service in a manner that ensures that the interests of the people take precedence over our desires as individuals.”

He likened public office to a marathon of long roads, steep hills, loneliness and uncertain rewards at the end, and urged South Africans to cherish the freedoms gained by many years of anti-apartheid struggle.

“We should never be despondent if the weather is bad, nor should we turn triumphant because the sun shines,” he said.

He traced the achievements of his office, including transforming the economy “resulting in the longest period of sustained economic growth in the history of our country,” spurring social progress and winning South Africa the right to host the 2010 Fifa World Cup.

Mbeki was popular with investors, who praised his pro-business policies.

But, he said, problems remained.

“Despite the economic advances we have made, I would be the first to say that even as we ensured consistent economic growth, the fruits of these positive results are still to be fully and equitably shared among our people, hence the abject poverty we still find coexisting side by side with extraordinary opulence.”

He said he was convinced that the incoming administration would improve on the work done so far in South Africa’s 14 years of democracy.

In his speech, Mbeki insisted that neither he nor his Cabinet had interfered in the work of the NPA, despite Judge Nicholson’s ruling.

“I would like to state this categorically that we have never done this and never compromised the right of the National Prosecuting Authority to decide whom it should prosecute and not prosecute,” he said.

“This applies equally to the painful matter relating to the court proceedings against the president of the ANC, Comrade Jacob Zuma.”

He said that since the attainment of freedom in 1994, the government had acted consistently to respect and defend the independence of the judiciary.

He assured the nation that the successive governments since 1994 had never acted in any manner intended wilfully to violate the Constitution and the law.

“We have always sought to respect the solemn oath of office each one of us made in front of the Chief Justice and other judges, and have always been conscious of the fact that the legal order that governs our country was achieved through the sacrifices made by countless numbers of our people, which included death.”

For this reason, he said “our successive governments have honoured all judicial decisions, including those that went against the executive”.

However he said this did not mean that the executive did not at times have strong views which “we would have publicly pronounced upon”.

“The central approach we adopted has always been to defend the judiciary rather than act in a manner that would have had a negative impact on its work.

“Indeed, on the infrequent instances when we have publicly expressed views contrary to those of the judiciary, we have done so mindful of the need to protect its integrity.”

Mbeki concluded his speech by thanking the people of South Africa, in all 11 official languages.

“Once more, I thank you most sincerely for affording me the opportunity to serve you and to serve the people of Africa,” he said.