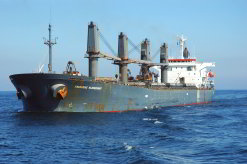 The Eastern Cape’s Department of
Transport plans to visit 60 schools to
raise awareness among pupils of the
opportunities that exist in the maritime
and aviation industries.
(Image: MediaClubSouthAfrica.com. For
more free photos, visit the image library)

Once, being a sailor or pilot meant you faced danger almost daily and had the opportunity to discover new worlds and earn praise and admiration. Nowadays, fewer youngsters are interested in taking to the seas or the air and this has led to a shortage of pilots and sailors in South Africa.

As part of a strategy to tackle this situation, more than 200 young people were invited to attend an information sharing session organised by the Eastern Cape Department of Transport (ECDoT) at the province’s Bhisho Airport in late April.

The event was meant to encourage the participants, most of whom were university students from institutes around the Eastern Cape, to register for learnerships in the aviation and maritime sectors.

According to ECDoT’s communications manager Ncedo Kumbaca, the department targeted previously disadvantaged matriculants and students who were unaware of the opportunities existing in maritime and aviation.

“Young people from rural areas need to be taught about these industries,” he said, adding that ECDoT also wished to educate the students on the complex criteria that will ensure a successful application.

“Many think a distinction is enough to get a learnership but it is not,” he said.

At the same function Mahlubandile Qwase, then the Eastern Cape’s MEC of education, attributed this lack of global presence to the poor maritime education in coastal areas of the country. He claimed that there are three ports in the Eastern Cape but not a single maritime school.

Kumbaca said that another factor is the large number of high school learners who drop maths and science, subjects which are crucial in kick-starting a career in maritime or aviation.

Because of this, he said, the two industries remain the most untransformed in the country.

However, to counter this unacceptable state of affairs, representatives from ECDoT have been on an awareness drive since 2010, and plan to visit a total of 60 schools to educate learners on seafaring and piloting.

Such drives may not be necessary in the near future. According to Qwase, plans were in place to establish a maritime school in the province in 2011.

“By 2015, we will have fully fledged maritime high schools and 300 graduates,” he said.

Developing the aviation and maritime industries

Students had the option of registering for one of three programmes that were made available on the day.

Students who have passed grade 12 with at least a D average or a level five in maths, were medically fit, older than 16 and had no criminal record, were registered as potential flyers into the Aviation Learner Training Programme.

Female students with a high school pass of at least a D average or a level five in maths and science, and a passion for aviation, were encouraged to sign up for the ladies-only Cadet Pilot Programme.