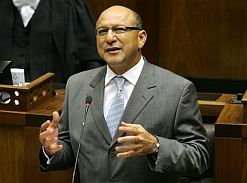 South Africa’s Minister in The Presidency Trevor Manuel has been appointed as joint chairperson of the Green Climate Fund, which is tasked with designing a finance system to help developing countries adapt to climate change.

Manuel, who is the head of South Africa’s National Planning Commission, will chair the Green Climate Fund together with Mexican Finance Minister Ernesto Cordero Arroyo and Kjetil Lund, state secretary of the Norwegian Ministry of Finance.

The Green Fund was launched following an agreement at the 2010 UN climate change conference in Cancun, Mexico. The plan was to start a new institution to set in motion international action in dealing with climate change.

The fund is made up of a 40-member committee and is intended to raise and distribute R674-billion (U$100-billion) a year by 2020 to protect poor countries against the impacts of climate change and assist them with low-carbon development.

The committee will meet four times in 2011 to prepare a report on the fund. The report will be presented to over 190 countries due to attend the UN climate change conference in Durban, South Africa, in December this year.

“The high level of interest among governments in contributing to the design process is a demonstration of the great interest among parties in the Green Climate Fund,” said UN’s Framework Convention for Climate Change executive secretary Christiana Figueres. “Parties have put forward experienced and respected individuals from the fields of finance and climate change.”

The South African government is considering a tax of R75 ($10.63) per ton of carbon dioxide emitted. Based on the government’s proposed “polluter pays principle”, they want to use the carbon tax to reduce South Africa’s greenhouse emissions while ensuring that polluters are penalised. The country is hoping to reduce its carbon emissions by 34% by 2020 and 42% by 2025.

“Carbon emissions must be priced,” said Manuel. “The fact that you can pollute the atmosphere and not pay for that pollution has to be one of the most manifest market failures.”

South Africa is heavily dependent on coal and is the world’s 14th largest emitter of greenhouse gases. Determined to cut emissions, the country plans to penalise companies such as state power company Eskom, and other companies in dominant sectors such as metals, mining and petrochemicals that work with coal, which are the biggest carbon emitters.

A world of experience

Manuel has solid experience in dealing with global development. He served on the UN’s High Level Advisory Group on Climate Change Finance in 2010 and was appointed UN special envoy for Development Finance in 2008.

In 2000 he chaired the World Bank and International Monetary Fund’s board of governors, as well as the bank’s development committee from 2001 to 2005. He was also one of two UN special envoys to the 2002 Monterrey Financing for Development summit.