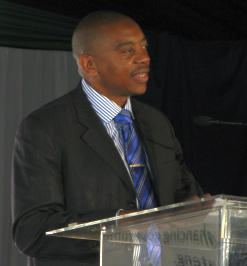 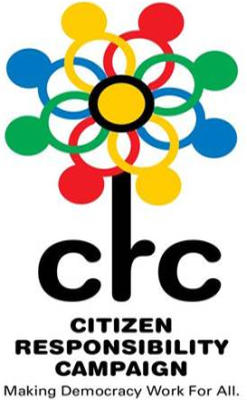 The Citizen Responsibility Campaign aims to remind people that duties and rights go hand in hand in a democracy.
(Image: Gauteng Provincial Legislature)

Speaking at the launch event at Constitution Hill in Johannesburg, Brand South Africa’s director of stakeholder relations, Iggy Sathekge, said: ”In building a strong nation brand, our organisation also seeks to create South Africans who will reflect the value proposition that we want the world to see in our country.”

Sathekge was one of a handful of dignitaries attending the unveiling to the media of the Citizen Responsibility Campaign (CRC), an initiative of the Gauteng Provincial Legislature’s (GPL) speakers’ forum. This body, a voluntary organisation made up of speakers from the province’s municipal districts as well as the provincial speaker, is a mirror of the national speakers’ forum. Its objective is to help municipal speakers to work together to strengthen the constitutional process, and improve the government’s accountability to its constituents.

Other guests included the GPL speaker Lindiwe Maseko, the deputy speaker Uhuru Moiloa, and the Rev Gift Moerane, head of the Gauteng section of the South African Council of Churches.

The CRC, according to Maseko, aims to give meaning to public participation in the government, and to galvanise all citizens of the province to take a more active role in shaping their communities and country. It will achieve this by reminding people that not only do they have rights as citizens in a free and democratic South Africa, but they have duties and responsibilities too.

“Sustainable development can only happen when there is a strong relationship between the people and those they elect,” she said, adding that the new campaign, as well as existing structures such as public hearings, meetings and various forums, indicates the GPL’s eagerness to involve the people of the province in the government.

“We are boosting the voices of the good citizens who report crime, defend our country, pay their taxes, donate blood, and refuse to bribe police officers,” said Maseko.

Looking for a tipping point

“The task of building our country requires all of us to roll up our sleeves and work,” said Deputy Speaker Moiloa. “It’s not about the words that we speak, but rather how we put our hands into the mud and get on with it.”

He said that on the eve of the anniversary of 20 years of democracy in the country, which takes place throughout 2014, the country needs a “tipping point” that will change the behaviour of its people and swing the pendulum towards a peaceful and constructive society.

“We want to be able to say that we are proud of having eradicated evils from our society. Crime can’t be wished away or talked down – we must act.”

Moiloa spoke out against criminals who seek to destabilise communities for their own personal gain. “We should not live side by side with those who commit atrocious deeds. But yet they live among us, and we protect them because we think their activities don’t concern us.”

He urged citizens to work together with the CRC in the years ahead, but said that the immediate task was to clean Johannesburg’s streets. This mass clean-up effort would happen on 18 July, he said, the birthday of former president Nelson Mandela and of late, a day when citizens around the world give their time towards helping the poor and needy. It’s also the day on which CRC will be launched publicly.

Sathekge agreed that it would take the efforts and energy of the whole country in unison to make a real difference. “Building the nation can’t be the work of a single entity – it must be the work of the collective.”

He mentioned the Play Your Part campaign, which encourages people throughout the country to contribute towards positive social change, as an example of this philosophy.