Lufhereng is the biggest housing project
in Gauteng. 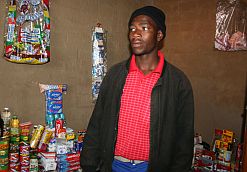 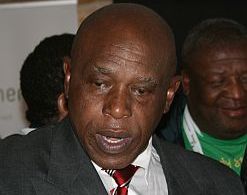 Minister of Human Settlement Tokyo
Sexwale has vowed to root out corruption
in social housing. 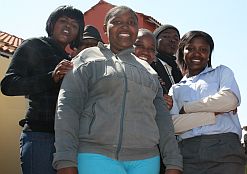 The new township is home to these
youngsters.
(Images: Bongani Nkosi)

After living in a Soweto farming settlement without proper shelter for about 15 years, Itumeleng Malebo has finally moved into a new house.

Malebo, in his early 30s, is one of the beneficiaries of the Lufhereng housing scheme taking shape on Doornkop and Zuurbult farms in Soweto – South Africa’s largest and most famous township in south-west Johannesburg.

The unemployed Malebo moved into his semi-detached house on 14 August 2010, where he stays now with his 20-something cousin, Tshepo Mfati.

Soon after relocating, Malebo found a way of keeping hunger at bay by starting a spaza shop, which he runs from one of the bedrooms of the new house.

“I opened my shop immediately when I moved in last Friday,” he said.

He mostly sells groceries in his fledgling enterprise, and business has been growing gradually as fellow residents trickle into the newly developed area.

This is what’s motivating Malebo to expand his small-scale venture: “I want to put in shelves very soon,” he said.

The government officially handed over Lufhereng’s completed houses to beneficiaries on 17 August during a ceremony attended by community members and Minister of Housing Tokyo Sexwale.

Lufhereng is a combination of Sesotho and Tshivenda words, meaning a place where people come together.

Since late 2008 more than 900 houses have been built on the 18 000ha site, which will eventually accommodate between 24 000 and 25 000 dwellings. It’s Gauteng’s biggest government housing project.

“Every week we will be moving people into Lufhereng,” said Ruby Mathang, a leading official in the City of Johannesburg’s housing department.

The new project’s beneficiaries are primarily Doornkop and Zuurbult farm labourers and residents, as well as people from Protea South informal settlement and elsewhere in Soweto.

All these individuals registered for government’s social housing scheme in 1996 and 1997, including 79-year-old pensioner Nomfesane Mthula, who’s lived in the Protea South informal settlement since 1982.

Lufhereng is a mixed housing project, meaning it has residences available for free, for the unemployed; and houses for middle- to high-income earners, who qualify for a bond.

In the future it will also have houses for rent, schools, a business complex and other facilities.

“Families with differing income levels will have access to an array of different accommodation options,” said Johannesburg’s mayor Amos Masondo. “The demand for housing remains high.”

The farmland on which Lufhereng is being built won’t disappear completely, as the government plans to set aside a portion of 480ha for cultivating crops.

This will benefit the experienced and aspiring farmers of the area, according to the Gauteng provincial government.

Black Economic Empowerment cooperatives will also be able to cash in on the agri-business scheme and Gauteng expects 10 000 jobs to be created through agricultural opportunities there.

The Lufhereng project is one of many that the government is leading as part of its policy called Breaking New Ground.

About 8 000 housing projects are under way across the country thanks to this concept, which aims to speed up development of new formal settlements and eradicate slums.

The housing department was allocated R15-billion (US$2-billion) in the 2010 national budget to build new houses and has intensified its fight against corruption, which has plagued the sector over the years and seen many houses being handed over to incorrect owners.

The Special Investigating Unit has been roped in to probe 20 “problematic housing projects” across the country, as well as private contractors and employees of the department.