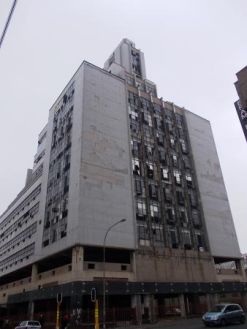 The Chrysler House development will provide the lowest rentals in Joburg for formal accommodation.
(Image: The Heritage Portal)

In a first for Johannesburg in Gauteng, an inner city property development company is to cater for the lowest salaried residents, offering the lowest rentals for formal accommodation.

The Affordable Housing Company, or Afhco, with the slogan “building inner city communities”, is restoring and converting Chrysler or Atkinson House, originally built as a motor showroom in 1938, and operating as a showroom until the early 1970s.

The heritage building will be converted into 470 units, catering for the lowest earners, at R3 750, who will be accommodated a R1 700 rent fee for a 20m² studio flat. This is possible because tenants will share communal bathrooms, says the chairman and chief operations officer for Afhco, Renney Plit.

The bathrooms, which will provide for privacy within each shower cubicle, are described by Plit as “a breakthrough for the city – there is such demand for affordable accommodation”. The revamped building is aimed at domestic workers, security guards, gardeners and informal traders, whose accommodation alternative is slum and hijacked buildings.

Chrysler House, at the lower end of Eloff Street in downtown Joburg, was just one of a number of showrooms where the latest American cars were on display for Joburgers to browse. It had a central lift core in which vehicles would be hoisted up and down the 12-storey building, for servicing, panel beating, or storage.

Afhco is one of the city’s biggest housing development companies, with an impressive portfolio. Over the past 18 years the company has bought and converted more than 60 inner city office buildings, offering Joburg residents 5 500 apartments, and housing 20 000 people in “decent accommodation”, in a R1.5-billion portfolio.

It now only owns 45 of those buildings, but together with some 80 “decent developers” in the city, there are now 50 000 units available for rental in the inner city, able to house 250 000 people.

Plit estimates that the R10-billion these developers have pumped into the central business district are changing the city from block after block of office buildings, to one where hundreds of thousands live and work.

One of Afhco’s biggest conversions is 120 End Street in Doornfontein in the inner city. It has 925 units, with rents ranging from R2 700 to R3 600 for one and two-bedroomed flats.

Chrysler House is Afhco’s first major conversion of a heritage building. It is modelled on New York’s impressive Chrysler House, with a similar ziggurat tower design.

“Chrysler House reveals a new level of sophistication and competence in the Johannesburg of its day, above all in its core of extra-large lifts, vertical service ducts, air-conditioning (to keep the dust of the mining town off the shiny automobiles) and massive reinforced-concrete structure with cantilevers of six and a half metres on the perimeter (up to the level of the setbacks),” writes respected architect Clive Chipkin in Johannesburg Style, Architecture and Society 1880s-1960s.

Its double-volume ground floor showroom “once glinted with the latest models of stream-lined US automobiles – icons of Americanisation – on the rubber-tiled sales floor”. Its décor consisted of the latest Bauhaus-style chairs, tables and ashtray stands.

“The main Eloff Street frontage is in the Skyscraper Style, with continuous, vertical stainless-steel fins (once highlighted at night with green vertical neon strips) to emphasise verticality,” Chipkin continues.

“The audacious use of reinforced-concrete structure, stainless steel, neon strips, a glass window wall 26 m high, and the absence of contrived decoration, all form part of the new vocabulary of 20th century architecture.”

Plit has replaced the stainless-steel fins running up the height of the building – they have been installed but are wrapped in plastic to protect them before the building is opened in March next year. “The impact of the vertical glazing with the vertical fins is very impressive,” he says.

Although the building has been stripped of all its metalwork, some original features remain –beautiful terrazzo floors, unusual glass bricks, the rectangular granite tiles in the foyer, and the two winged stairways leading up to the platform where the salesmen sat.

Robin Fee, the heritage architect at Fee & Challis Architecture involved in the project, says that the original refined terrazzo exterior finish to the building was covered at some point by mosaic tiles. These tiles have been falling off the walls, and have now been completely removed. The exterior has instead been finished in smooth plaster and painted a beige/grey colour, to closely match the original colour.

It’s not all bad news, though. The original terrazzo at street level has been preserved, he says.

Internal elements being restored are the showroom and the salesmen’s mezzanine gallery, and the dual stairway to the gallery. The steel handrails on the stairway will also be replaced.

The main entrance with its grand square arch will also be restored. Full height glazing on the ground and first floor frontages will be installed.

“The front at ground level had to be substantially altered to bring it in line with the original architecture. There is a section in the centre of the building that steps in from the pavement at an angle on the left and right, and this had over the years been removed and turned into a straight frontage,” adds Plit.

“It has been a very, very positive interaction with Afhco,” adds Fee. Heritage permission from the provincial heritage authority has been obtained to restore the skyscraper, with its Art Deco elements.

The revamp has been made possible through the Agence Francaise de Development – a development arm of the French government – which has provided a R150-million loan at favourable rates, at a time when finance is hard to get, says Plit.

In 2008 he opened CityKidz School, which caters for grades 0 to 7, with 300 children enrolled. Afhco has built a large garden on the rooftop of one of its buildings. And Afhco is a partner in a new initiative – transforming Kerk Street and surrounds on Friday and Saturday nights, with food stalls, movies, basketball, free wi-fi, music, poetry readings, and choirs set up on the pedestrian section of the street.

“We want to get the community out on to the street. I’m hoping the retailers will stay open.”

He also wants to improve the block outside Chrysler House, installing a playground, benches, chairs and basketball courts, making the area pedestrian-friendly.

In the building itself tenants will have access to a lounge, play areas, a crèche, and a shop, and on one of the top floors there’ll be a large laundry.

But Afhco does more in the city. It has replaced manhole covers, fixed potholes, painted street lines and replaced dustbins. Street cleaners and security guards are positioned outside the buildings Afhco owns.

“We are trying to develop stable communities, it’s a holistic approach,” adds Plit.