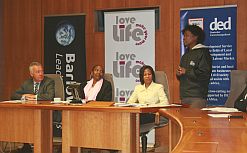 Lovelife’s new initiative named Connected! will be the main beneficiary of the partnership.

Connected! is a strategy aimed at the thousands of young South Africans who possess leadership potential but have no chance to develop it.

Barloworld has given a grant of US$120 000 (R1-million), to be spread over three years. DED will match the first year’s portion.

DED director-general Jürgen Wilhelm, present at the signing with several other dignitaries, applauded the new initiative and the opportunities for development that it presented.

“The DED believes that our support of innovative approaches to HIV prevention, such as this one, is key to halting the spread of the disease,” said Wilhelm. He added that the organisation was delighted to be able to contribute, through its association with loveLife, to this exciting new national strategy.

Since it seeks to groom a new generation with a new outlook on life and renewed sense of responsibility, said Wilhelm, Connected! would serve as an example to the international community, especially within the Southern African region.

Dr David Harrison, former loveLife CEO and now consultant and Connected! project manager, was confident that the initiative would fulfil its five-year goal of building bridges between mainstream South African society and the country’s poor communities.

Explaining the three-part Connected! strategy, Harrison said the first step is the establishment of the network that will provide a platform for youth to make their ideas known. “Let their voices be heard, but in a way that is constructive and problem-solving, instead of just angry,” he commented.

The second task is to change the mindsets of the youth so they see themselves less as recipients of public redress, and more as local innovators among their people.

Lastly, the young innovators will be linked to opportunities. This, said , is what differentiates Connected! from a number of other leadership programmes, which often only benefit those who already have access to opportunities.

“In this way they will show their peers that corruption and graft are not the only ways to get ahead,” said , “and that a risky lifestyle is simply not acceptable”.

“We hope to contribute to building leaders who will be inspired to work towards their dream, but will also serve the community and go on to find their place in the world,” said Matlhape.

GroundBREAKERs are the 18- to 25-year-olds who are already familiar with the loveLife mission and vision, have experience in mobilising their communities for good, and in many cases have become local leaders.

To date, almost 10 000 youth have graduated from the one-year service programme.

In addition, more than 20 000 youngsters between the ages of 12 and 25 have completed training as mpintshis, assisting their groundBREAKER team leader in implementing programmes in schools, clinics and community-based organisations.

According to a 2008 survey conducted by Volunteer Service Enquiry Southern Africa, groundBREAKER graduates are powerful advocates for change, are tremendously positive about working with their communities, and often go on to hold leadership roles in community organisations.

Furthermore, the survey revealed that groundBREAKERs have better prospects of education and employment. About 60% have found employment or started their own businesses. And almost 50% have enrolled in tertiary studies, compared with the national average of 30% of young people who study after matriculation.

With careful nurturing, the partners believe, these will be the leaders of the future. By putting them in touch with an ever-growing country-wide network of similar-minded people, Connected! aims to encourage about 5 000 of these potential young leaders, located mainly in marginalised communities, to become public innovators.

At the same time the programme will boost their management, analytical and innovation skills, giving them the tools to address pressing issues in their communities.