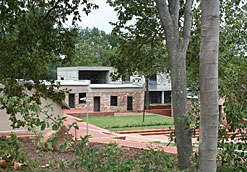 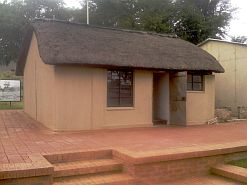 The little thatched hut where Mandela,
disguised as a gardener, lived during his
sojourn at Liliesleaf.
(Image: Wikimedia)

Liliesleaf, the farm that once sheltered Nelson Mandela and other political fugitives during apartheid, is set to become even more of an attraction with a R75-million (US$9.7-million) hotel due to open on the Rivonia, Johannesburg, property towards the end of 2011.

The boutique hotel is the vision of Port Elizabeth hotelier Adrian Gardiner, founder and chair of the Mantis Group of destinations. Mantis boasts an impressive selection of boutique hotels and nature reserves located around South Africa and Rwanda, as well as England, Scotland, Ireland and Europe.

In January 2010 the company ventured into South America for the first time, with the acquisition of three lodges in the Chilean regions of Atacama, Patagonia and Easter Island. Mantis is also associated with the eco-camp White Desert in Antarctica, and the World, known as the largest private yacht afloat today.

The flagship of the Mantis Group is the famed Shamwari private game reserve, near Port Elizabeth, in the Eastern Cape province. Shamwari was the group’s very first piece of land, purchased by Gardiner in 1990.

Visitors to Shamwari can see all of Africa’s Big Five – elephant, rhino, buffalo, lion and leopard – and relax in the knowledge that their destination is malaria-free.

The wildlife sanctuary has won many international accolades, and at the gala World Travel Awards for Africa in 2009, was voted the world’s leading conservation company and game reserve for the 13th consecutive year. It is renowned for having reintroduced black rhino to the Eastern Cape, after the magnificent animals became extinct in the province in 1853.

“We are proud of the achievements and commitment made by all … and will continue to promote ecologically sensitive tourism and support the local environments through community development projects and conservation of natural and human resources,” said Gardiner.

The hotel magnate now plans to put his business and hospitality acumen to work in developing a boutique hotel on three acres of Liliesleaf’s vacant land.

Another recent development, the farm’s new museum, opened to the public in 2008. It reflects upon a time when the property was the secret headquarters of the African National Congress’s (ANC) military wing, Umkhonto we Sizwe (isiZulu, meaning “Spear of the Nation”).

Other facilities – such as a spa, restaurant and wine cellar, and conference rooms – will also be available.

The South African Communist Party (SACP) bought Liliesleaf farm in 1961, with the intention of using it as a clandestine party headquarters.

It was here, on 11 July 1963, that police, driving laundry and florist vans to avoid alerting the farm’s occupants, arrested a number of senior ANC members. They included Walter Sisulu, Govan Mbeki, Ahmed Kathrada, Denis Goldberg and Arthur Goldreich, among others.

Their capture led to the infamous Rivonia Treason Trial of 1963 and 1964, and ended with all of the accused but Goldberg serving lengthy terms on Robben Island. Because he was white, Goldberg was sent to Pretoria Central Prison instead.

Ironically, the group had already decided that, for security reasons, the 11 July meeting was to be the last at that location.

Former president Nelson Mandela, who had been living and working undercover on the farm under the nom de guerre of David Motsamayi, was not among those arrested. He was already imprisoned on Robben Island, serving a five-year sentence for less serious political crimes after his arrest in Howick, KwaZulu-Natal, the year before.

However, during the Liliesleaf raid police discovered documents implicating Mandela in Umkhonto we Sizwe’s activities, so in mid-July he was brought back to Johannesburg to stand trial with the others.

The Liliesleaf Trust, established in 2001 by former president Thabo Mbeki, whose father was among those arrested in 1963, is tasked with the development and maintenance of the site as a vital part of South Africa’s history.

Since 2001 the farm has offered a luxury guest house with three suites and a conference centre. Alongside the original buildings now stand a resource centre and liberation centre, which together house an extensive archive, many related exhibits, an auditorium, coffee and curio shop, and a crèche.

The proposed hotel will complement the other new additions, and the rooms, too, will be decorated in a style that pays tribute to the Rivonia Trial defendants. The trust’s CEO Nicholas Wolpe, son of Liliesleaf arrestee Harold Wolpe, has reportedly approved the new development.

In an interview with the UK’s Daily Mail travel section, he said, “This is not a commercial venture, it’s more about making Liliesleaf self-sustaining. We thought about the best way to do this and a hotel seemed to fit.”