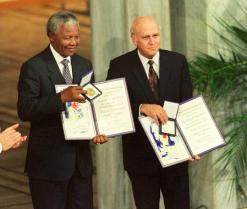 Former presidents Nelson Mandela and
FW de Klerk jointly received the Nobel
Peace Prize in 1993 in recognition of
their efforts to bring about democracy
in South Africa.
(Image: Wikimedia Commons)

South Africa today marks the 22nd anniversary of the unbanning of liberation movements, including the African National Congress, South African Communist Party and other liberation organisations.

Then-president FW de Klerk stunned the world on 2 February 1990 when he announced in Parliament that his government had decided to release Nelson Mandela and other political prisoners unconditionally, and unban political parties.

Struggle stalwarts Mandela, Walter Sisulu and six others had been convicted of treason and sabotage in June 1964 and sentenced to life imprisonment.

Nine days after De Klerk’s announcement, Mandela walked out of prison a free man. The day, 11 February, was marked by jubilation amongst citizens, and intense media coverage at home and abroad.

De Klerk and Mandela were jointly awarded the Nobel Peace Prize in 1993 for their efforts in ending apartheid.

Since the early 1980s, unknown to the majority of South Africans, Mandela and other imprisoned anti-apartheid fighters had been negotiating with the South African government, then under the leadership of the late PW Botha.

Botha wanted Mandela to renounce his anti-apartheid principles and give up the armed struggle, and in 1985 offered him freedom on this basis. Mandela turned the offer down, saying that only a free man could negotiate.

Between 1985 and 1990, and under intense local and international pressure, Mandela and the government – mainly then justice minister Kobie Coetsee – held a number of meetings, which laid the foundation for what was to come.

In a television interview, Coetsee, who died in 2000, said that before he met Mandela, the image in his mind was one of a man who wanted to seize power at all costs.

At their first meeting, which took place in a hospital where Mandela was recovering from prostate surgery, Coetsee took an immediate liking to the prisoner.

“We met as though it was not the first meeting, it was one of many other meetings,” he said. “It did not bear the stamp or even appearance of a meeting between … warder and prisoner. Perhaps, it was a meeting between friends that had known each other for a very long time.”

But it was only in 1989, when FW de Klerk took over as president from Botha, who had suffered a stroke, that tangible progress was made.

De Klerk dropped the bombshell on 2 February 1990 when he announced Mandela’s release, and added that a negotiated settlement would end apartheid, all liberation movements would be unbanned and all political prisoners released.

Nine days later Mandela walked out of Victor Verster prison, his then wife Winnie holding his hand tightly, with his fist raised in the liberation movement salute.

“Your tireless and heroic sacrifices have made it possible for me to be here today,” said Mandela in his first speech in 27 years as a free man.

“I therefore place the remaining years of my life in your hands. On this day of my release, I extend my sincere and warmest gratitude to the millions of my compatriots and those in every corner of the globe who have campaigned tirelessly for my release.”