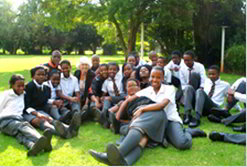 Paul Ilunga, a mathematics and physics
teacher from the DRC, helps a Grade 11
pupil with geometry.
(Image: Pippa Ehrlich) 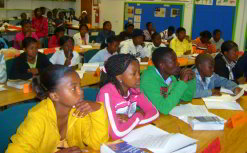 Student teachers gain confidence and
are able to better interact with their
pupils after graduating from the five-year
Leap teacher training course.
(Image: Leap Science and Maths School)

Educated African refugees are helping hundreds of children in Cape Town’s underprivileged communities to learn science and mathematics, thanks to an educational initiative called Leap.

Every Saturday morning about 800 pupils from Grades 10 to 12 travel to the southern suburb of Pinelands for tutoring in these subjects. On weekday afternoons, tutors travel to Leap Learning Centres in the townships to work with up to 840 Grade 8 and 9 children from 12 schools in Cape Town’s disadvantaged suburbs.

These centres are an outreach project run by the Leap Science and Maths School, which aims to transform educationally disadvantaged communities. There are 58 tutors working at the centres, 10% of whom are South African. Others are a diverse mix from the Democratic Republic of Congo (DRC), Burundi, Botswana and Zimbabwe.

The project and Leap School were established simultaneously in 2004.

Originally tutors joined the program on an unpaid voluntary basis. Within in a few months Leap founder John Gilmour was overwhelmed by the tutors’ commitment and competency, and set out to source appropriate funding. The tutors now earn a small daily stipend of R110 (US$16).

As mathematics and science are often perceived as difficult, pupils often choose easier subjects to avoid jeopardising their matric exemptions. But without these subjects, pupils’ opportunities for tertiary study are severely limited.

Students attending the Saturday morning session are grateful for the extra support.

“They explain better than our normal teachers. If you don’t understand, they ask you what you are struggling with,” said Asemahle Mlanga, a 17-year-old pupil from the nearby seaside resort town of Strand.

Phaphama Maoblo, also in Grade 11, remarked, “My test marks have improved well. I think they are a big help to South African children.”

“I find it fascinating that there are this many students who are desperate for a quality education, and will spend their own money to come here on Saturday,” said Mark Medema, president of Washington DC-based NGO EdVillage, as he observed a Saturday class. “I don’t think this happens in the US.”

South Africa’s public education system is hampered by a lack of qualified teachers, which makes the contribution of these educated foreigners extremely valuable.

The tutoring program has not only benefited pupils but has also been essential in helping refugees to integrate into South Africa.

Sammy Ntumba, head of the Leap Learning Centre Project, left the DRC in 2003 to come to South Africa. He arrived with a degree in chemical engineering and metallurgy, but his qualification was not recognised in this country.

Ntumba started postgraduate studies at the University of Cape Town (UCT), but needed to find a way of supporting himself, as well as funding his studies. His first job was handing out advertising flyers at a traffic light. Later, he worked as a night security guard in an affluent Cape Town suburb. It was exhausting work and he was becoming increasingly frustrated by the lack of stimulation.

In 2004, he saw an advert at UCT for volunteer tutors in township learning centres. Seven years later, the programme has taken his life in a new direction. He has been able to bring his wife and son to live with him in South Africa, and has decided to pursue a career in social development, rather than engineering.

According to Ntumba, “We are educated. It’s very important to transfer that to others. If I don’t do it, I will die with that knowledge. It is not costing us gold and silver, it costs nothing, but it is a big thing that we are doing.”

Ntumba’s story reflects that of many of his colleagues at Leap. Most have been able to leave their security jobs, complete their studies and begin working for South African companies, and in many cases, educational institutions.

Dr Zelo Mangombo, also from the DRC, came to South Africa in 2000 with a degree in education, and honours in chemistry. In 2010 he completed his doctorate in chemistry at the University of the Western Cape.

Even with his new qualifications, Mangombo continues to teach at Leap. “Since I have been here I have seen great improvements,” he said. “The children are open and willing to learn. They are dedicated to their work.”

When Leap first opened its doors in 2004, it welcomed 72 Grade 11 and 12 pupils. It now has four campuses, two in the Western Cape in Langa and Gugulethu, and two in Gauteng in Alexandra and Diepsloot. Each school has 170 pupils, of whom 69% are girls.

In 2010 South Africa achieved a national matric pass rate of 67.8%. Of those pupils, 23.5% obtained a university entrance. The national pass rate for science was 48%, and 47% for mathematics.

Leap is making a significant contribution to quality education in South Africa. In 2003 only 55 African language-speaking Western Cape pupils achieved university entrance levels in mathematics and science. Last year, Leap’s 107 Grade 12 pupils achieved a 98% overall pass rate. All of these children wrote mathematics and science, achieving a 98% and 90% pass rate in these subjects respectively. Six pupils earned distinctions in mathematics, and for the first time, three distinctions were received for science.

There is also a teacher training module for students taking their teaching degrees through correspondence. The five-year programme aims to give Leap teachers the advantage of a thorough knowledge of their chosen subjects, and enhanced communication skills so that they can better interact with their pupils.