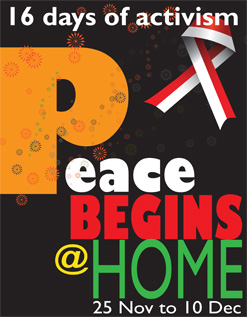 The international theme for this year’s 16 Days campaign is “From peace in the home to peace in the world: Let’s challenge militarism and end violence against women”.
(Image: Gender Links)

Imagine if, for 16 days, there was no rape, no child abuse. The 16 Days of Activism for No Violence Against Women and Children campaign, which kicks off on Monday, challenges South Africans to declare a truce on violence against women and children – and, ultimately, to make it a permanent one.

The 16 Days of Activism Against Gender Violence is an international campaign originating from the first Women’s Global Leadership Institute sponsored by the Centre for Women’s Global Leadership in 1991. Participants chose the 16 days, from 25 November, International Day Against Violence Against Women, to International Human Rights Day on 10 December, to symbolically link violence against women and human rights and to emphasize that such violence is a violation of human rights.

The days cover other significant dates such as International Women Human Rights Defenders Day on 29 November 29 and World Aids Day on 1 December.

Minister for women, children and people with disabilities Lulu Xingwana will officially launch the campaign, in partnership with North West premier Thandi Modise, at Mmabatho Stadium in Mafikeng on Sunday 24 November.

The opening ceremony will take the form of an interactive session with community members, and will be joined by representatives from People Opposing Women Abuse, Sonke Gender Justice, Childline and Disabled People South Africa. The media is invited to attend.

The international theme for this year’s 16 Days campaign is “From peace in the home to peace in the world: Let’s challenge militarism and end violence against women”. Under the theme, the campaign will focus on three priority areas:

While the campaign runs only for 16 days each year, its objectives are reinforced by a year-long programme and a national plan to combat abuse.

The government, business, civil society organisations, faith-based organisations and the media are all participating in the drive to increase awareness of the negative impact of violence and abuse on women and children.

The campaign also aims to:

What you can do

South Africans are urged to support the campaign by wearing a white ribbon – a symbol of peace – during the 16-day period to symbolise their commitment to never commit or condone violence against women or children.

Other ways to support the campaign:

South Africa, according to non-governmental organisation Gender Links, needs to close the gap between the “rhetoric of gender equality” and the “reality on the ground”.

Gender Links says the country has made impressive strides in recognising the roles and rights of women and children.

The Constitution recognises gender equality as the cornerstone of South Africa’s democracy, and new legislation – such as the Choice on Termination of Pregnancy Act and the Domestic Violence Act – have been lauded for enforcing the rights of women.

But more needs to be done. “Changing laws can be swift,” says Gender Links. “Giving them effect, and changing the mindsets that often render them ineffective, is a much more demanding task.”