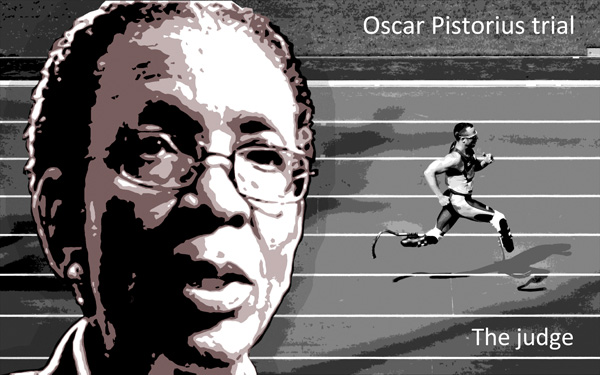 The Oscar Pistorius trial is not Judge Thokozile Masipa’s first high profile case. In the 16 years since becoming judge she has presided over four major cases and has become known for handing down stiff sentences. (Image: Graphic by Mary Alexander. Background image courtesy of Jonny Ross, Flickr)

The judge presiding over the Oscar Pistorius trial is accustomed to high-profile cases. Since becoming a high court judge in 1998, Thokozile Masipa has presided over numerous ground-breaking trials. But despite gaining so much media attention over the years, she remains reserved and averse to the spotlight.

While working as a crime reporter for The World, Post and The Sowetan newspapers, she reported on the difficulties of life under apartheid. It piqued her interested in law and she became an advocate in her late forties before being the third black woman in South Africa to be appointed to the bench in 1998, following Constitutional Court Judge Yvonne Mokgoro and High Court Judge Lucy Mailula.

In the years that followed, Masipa has presided over four cases that attracted media attention. Two in particular showed her willingness to hand out maximum sentences to men convicted of violent crimes against women.

No mercy for abusive men

In May last year she handed down a 252-year sentence to serial rapist and robber, Shepherd Moyo, after he was arrested and tried after a seven-year crime spree. Moyo terrorised residents in northern Johannesburg; he would ransack their homes and in some instances, rape his victims.

Masipa found him guilty on 11 counts of housebreaking and robbery, three of rape and one of attempted murder. She sentenced him to 15 years for each of the 11 robberies, 12 years for attempted murder and life sentences for all three rape charges.

In her judgement, Masipa said Moyo was a detriment to society who forced his victims to become prisoners in their own homes after he had attacked them. She added that the rape victims never recovered from the trauma and said, “What weighs with me very heavily is that the accused showed no remorse, therefore it is difficult to imagine he can be rehabilitated.”

In another case of a violent crime against a woman, in 2009, Masipa handed down a life sentence to police officer, Freddy Mashamba, for shooting and killing his wife, Rudzani Ramango. During an argument over a divorce settlement in May 2008, Ramango and her aunt, Patricia Ramango, jumped into a vehicle and tried to flee from Mashamba. The officer, enraged, gave chase until they stopped behind the charge office at the Louis Trichardt police station. It was here that he shot at his wife, hitting her seven times in the face and three in the chest. She died at the scene; Patricia Ramango escaped unhurt.

He was tried at the Polokwane High Court with Masipa as the judge. She said the sentence she handed Mashamba was meant to serve as a lesson to police officers that conflict cannot be solved with violence. “No one is above the law,” she said. “You deserve to go to jail for life because you are not a protector, you are a killer.”

Siding with the poor

Masipa presided over a landmark case in 2009 that gave precedence to the rights of the poor. In June 2005 Blue Moonlight, the new owners of a building in Saratoga Avenue in Berea, Johannesburg, posted notices asking its 86 occupiers to vacate the property. The City of Johannesburg followed this up in October that year by issuing their own notice to occupiers to vacate the premises under its Fire Brigade Service Act. The residents did not move.

Blue Moonlight then brought a high court application to have them evicted. The occupiers opposed the eviction and asked if the city council could provide alternate accommodation if they were to move. However, the City claimed that it was not their duty to find alternate accommodation as the occupiers did not qualify for emergency relocation. When the matter reached the court, Masipa sided with the occupiers, saying the City had failed to fulfil its obligations to find alternative accommodation for squatters who were threatened with eviction. She criticised the City for trying to distance itself from the problem. “This, indeed, is at odds with the Constitution and is tantamount to failure by the City to comply with its constitutional obligations,” she said.

In December 2010, Masipa ruled against an R85-million lawsuit that former Eskom chief executive, Jacob Maroga, brought against his previous employees for unlawful dismissal. He asked that he either be reinstated as the utility’s chief executive or be compensated. However, Eskom maintained that Maroga offered to resign and the board accepted his resignation.

According to Masipa, Maroga’s story was contradictory, unreliable and “demonstrably lacking in credence” and she concluded that his version of events was a fabrication. Masipa ordered Maroga to pay the costs of the trial, which included the employment of five counsel.

During Pistorius’ trial, Masipa has shown that she can take a hard line approach when it comes to media coverage of the trial. She came under scrutiny when she banned broadcasts and live tweets from the courtroom during the postmortem coverage by pathologist Gert Saayman.

Masipa had also reprimanded both the defending and prosecuting advocates for their behaviour in the courtroom. Barry Roux was told he could not argue with a witness when he cross-examined police photographer, warrant officer Barend van Staden, over his labelling of the photographs he took of the front and back of a blood-smeared Lazer cricket bat.

She also told prosecuting advocate Gerrie Nel to “Watch your language,” when he called Pistorius a liar when the Paralympian was on the witness stand.

Masipa displayed her stern side again when she ordered a young man, who taking photographs with his cellular phone, out of the courtroom. Security officers then removed him.