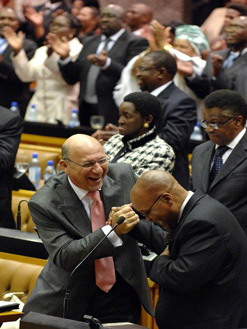 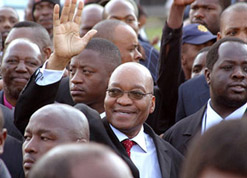 During the election trail, Zuma attracted
massive crowds who came to support him.
(Image: Friends of Jacob Zuma)

The newly sworn in members of the South African parliament have voted in African National Congress (ANC) president Jacob Zuma as the country’s next president in the National Assembly, during their first sitting.

Zuma received 277 votes, while the leader of the newly formed Congress of the People (Cope)Reverend Mvume Dandala received 47 votes.

The official opposition party, the Democratic Alliance, opted not to vote.

Pomp and ceremony were the order of the day when parliament opened on 6 May.

The singing of the national anthem, followed by a prayer, ushered in the first sitting of the National Assembly.

President-elect Jacob Zuma took an oath of affirmation with the first group; made up of the top 10 ANC Members of Parliament (MPs). South Africa’s current president,  Kgalema Motlanthe’s name did not appear on the list.

All the members of parliament sworn in stood in front of Justice Pius Langa and recited an oath, which ended with the well known closing, “so help me God”.

Cope has 30 seats in parliament after it secured 7.5 % of the votes in the elections.

The first seating of parliament also saw the comeback of a few familiar faces, while others took their seats for the first time.

ANC Women’s League president, Winnie Madikizela-Mandela made her comeback as a member of parliament.

Speaking to the media, she expressed her excitement at returning to the National Assembly, “The age of talking is past, we have to deliver and that’s the only reason why I came back here.”

Parliament veteran Koos Van der Merwe, from the Inkatha Freedom Party, has been in parliament for over 30 years and says there is a different energy about it this time around. “This is my 32nd year in parliament but there is something new this time, something exciting. It appears as if the new South Africa is coming to grips with things.”

The Freedom Front Plus’ Pieter Mulder was also upbeat about the opening of parliament.

“We wonder if it will be more of the same or will we get a different parliament. We will only know that when we start debating,” he said

Significant changes include the appointment of South Africa’s first male Speaker of the House since the country crossed over to democracy in 1994.

Max Sisulu, son of struggle veteran Walter Sisulu, was the only candidate put forward by the ANC for the position.

He follows in the footsteps of Gwen Mahlangu-Nkabinde, who took over from Baleka Mbete when she was appointed deputy president during the interim government period, which took over from September 2008.

“She worked tirelessly to lay the foundations for our new democracy and she created and enhanced the systems so that parliament could take its rightful place in our country,” said Sisulu as he paid homage to his predecessor Ginwala.

“Her initial work will resonate throughout the House. She has left us with a lasting legacy.”

Nomaindia Mfeketo, who became an MP in 2008, was appointed as the deputy speaker of the House.

Zola Skweyiya, minister of social development, was expected to return to parliament but resigned due to ill health.

In a written letter, Skweyiya, who has been an MP since 1994, thanked the ANC for having faith in him by re-electing him back to parliament but said that he had to focus on his health.

“Today, I retired from parliamentary politics due to health reasons. This is a decision I communicated to my movement, the African National Congress (ANC), in the past five years, and I reminded them sometime last year.

“I would like to thank the ANC and the people of South Africa for having confidence in me and [having] trusted me to serve in government for 15 years,” said Skweyiya.

Another notable difference in the opening of parliament was the increased number of women parliamentarians.

Dignitaries who graced the occasion today included diplomats, guests of the president’s office and guests of members of parliament.

Provincial premiers, who were elected earlier last week, were sworn in during today’s proceedings.