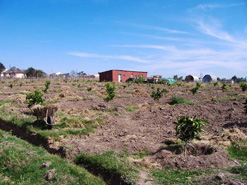 Recently planted young citrus trees at Mrs
Mtembu’s farm, Ntlaza. The Is’Baya
project has helped plant over 50 000
high-value fruit trees in over 1 500
homesteads in 50 villages in the Transkei. 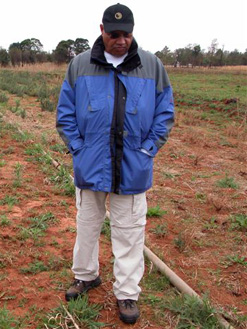 An Is’Baya herb-planting demonstration.
High-value crops such as herbs take much
longer to establish than ordinary crops
such as vegetables and maize, but they
have a long production life span and a far
higher return per volume.
(Image: Is’Baya)

When food costs rise, the poor suffer most. The recent surge in global food prices is no exception, and highlights the need for sustainable local production as a buffer against food inflation, particularly in impoverished areas. In South Africa, an organisation called the Is’Baya Development Trust is helping some 50 rural villages on the outskirts of the Transkei region on their way to self-sustainability.

Is’Baya, isiXhosa for “homestead”, is a rural development organisation working with villagers in the Transkei region of the Eastern Cape. It helps improve communities’ farming techniques to make productive land from the unproductive, and to provide them with the necessary basic services and support structures.

A former apartheid-era “homeland”, the Transkei is one of the country’s most impoverished areas. Is’Baya was formed in 1989 by Monelo Bongo and Moshe Schwartz, who saw the agricultural potential of the region.

“They wanted to show that the entire Transkei was capable of producing sufficient agricultural products, and even become the breadbasket of the country,” says Is’Baya director Peter Jones. “And the best place for development to happen is within the family home or homestead.”

Over the years there has been major degradation of the land with no development from previous or current governments. “What Is’Baya aims to do is to solve that problem and remove the heavy weight of underdevelopment from the economy and society of the country as a whole,” sociologist and Africa development expert, Professor Herbert Vilakazi.

“Rural poverty is now directly affecting the entirety of the South African economy and society. The failure of development in these areas is now forcing millions of people to leave rural areas and come to the cities.”

The project began with research by Is’Baya and the Agricultural Research Council (ARC), one of South Africa’s parastatal science councils, into the Transkei’s potential for the cultivation of high-value crops. “High-value crops take much longer to establish than ordinary crops such as vegetables and maize,” says Jones, “but they have a long production life span and a far higher return per volume.” The study overwhelmingly supported the viability of cultivating citrus and tropical fruit, as well as herbs and essential oils.

In 2000, Jones was approached to lead the project. With over 30 years’ experience, he comes from a rich tradition of self-reliance practice, working in the 1970s with activists such as Steve Biko and Dr Mampele Rampele for the Black Community Programmes, major community self-help schemes in KwaZulu-Natal and the Eastern Cape. In fact, all of Is’Baya’s trustees and the professionals they work with have been involved in community development since the 1970s.

Working with the ARC, Is’Baya’s helped introduce the high-value crops over a wide area along the coast of the Transkei and further inland. “Currently, a total of over 50 000 fruit trees have been planted in over 1 500 homesteads in 50 villages in the Transkei,” says Jones.

The ARC’s role has been mainly technical, as well as ensuring that the necessary technology available for agricultural production is passed on through ongoing training. “We concentrate on high-value crops, mainly fruit trees, which most of the farmers in the rural areas do have, but not the necessary technologies and necessary cultivars to use them commercially,” says the ARC’s Rosemary de Preez.

“It’s really about an integrated farming system where high-value crops can play a role in that farming system, but still include vegetable production. And more recently we introduced herbs specifically for essential oils production. South Africa is an importer of essential oils, yet it is a crop that could be produced in rural areas.”

Each farmer pays 50% of the cost of a tree. Is’Baya and the ARC’s costs, as well as the remaining 50% for the trees, are contributed by various government and non-government sources.

Is’Baya helps communities achieve increased production for food security purposes, introduce and achieve high levels of production of the high-value crops, and underscore all of this with appropriate organisation, such as cooperatives.

Before going into any rural villages, Is’Baya has to get buy-in from traditional leaders. “It’s a necessity and we’ve been hugely successful,” says Jones, “more so than any other government structure, including municipalities. We become involved mainly by specific invitation from the communities. At the moment we are involved quite deeply with the villages, all with their own functioning committees and management responsibilities.”

Merging the modern and traditional

“We believe our success lies in understanding people in the rural areas and making sure that we develop methodologies that are attached to their way of life and their traditional way of looking at development,” Is’Baya chairperson Pandelani Nefolovhodwe.

“We merge the modern and the traditional and they understand the methods because these methods are worked out with them. Because we have been working together for many years, we understand each other. It is no longer a ‘we’ and ‘them’ situation, it is just us working together and making sure that development work must go forward.”

Using their experience of working in rural areas, Is’Baya always gets consent to participate from traditional leaders and ensures there is interaction with all the participating homesteads. A village committee is formed of and liaison person appointed.

Each committee must attend at least two training sessions per year manages its own financial affairs, including the collection and depositing of monies for the trees.

This method of working together towards sustainability has obviously been popular in the villages of the Eastern Cape. A Mrs Mavithana from Hluleka village said: “This programme will continue being successful because the people from Is’Baya and the ARC are always available. They don’t just bring the trees and disappear, they check up on us at appropriate times. When something needs to be done at a certain time, they inform us. For example, even if your trees have got ants, you are able to ask them for advice.”

“Before Is’Baya and the ARC taught how to farm, I was just farming using an old method, which did not progress that much,” said Andile Sondlaba, also from Hluleka village. “I think they are experts because ever since I started farming as a young man, I have never come across an organisation that works with people like this. The other organisations don’t even come to the outskirts, yet this one is able to come to the people and show them practically by using their hands. And that is how we learned to farm.

“In our region there have been great changes. We didn’t even know that we could produce fruit juice with our bare hands, but they taught us how to and we are able to produce juice. I hope they never forget or abandon us.”

Mrs Mthembu from Libode was also impressed: “Is’Baya and the ARC helped me in many ways, including farming these oranges. I ordered from them, they delivered to me, they even taught me the process and the do’s and don’t of digging a whole.” While Mr Nonqana from Noqwekwana said, “The one thing that impressed me about Is’Baya is that they helped to test the soil before I planted. I had to give them the soil sample to see if my plants match the soil, and also to see which fertilizer is suitable. There have been some great changes since their arrival. Even here on my land where I have built, there are now many households that grow oranges thanks to Is’Baya and the ARC.”

Challenges include lack of water

Working in the rural areas, there are bound to be many challenges. “One of our main challenges is that we don’t have water in this area,” says Mr Nonqana, who is almost 80 years old. “We have to fetch water from very far away using wheelbarrows.”

“There is no plant material available because all the trees that have been planted by the farmers up until now are part of our programme,” says Du Preez. “Which means about 50 000 trees have been brought in from other parts of the Eastern Cape and as far as Limpopo and Mpumalanga. A lot of topsoil is lost annually into the rivers and down to the sea through soil erosion. Also, people don’t have access to the water. There are perennial rivers but there’s no access to that water.”

Is’Baya has been awarded a key planning grant by the Eastern Cape provincial government. “The objective of the grant is to design a holistic and comprehensive rural development programme – the Integrated Village Renewal Programme (IVRP) – based on the work of Is’Baya and the ARC, which can be applied on a mass scale in the Eastern Cape and beyond, and is due for completion at the end of May,” says Jones.

“We are hoping that once the IVRP is ready for implementation, it will be applied to these 50 villages that Is’Baya has already mobilised. We also hope that the national government will become involved in a major way to ensure that the IVRP becomes a national programme.”

“Our future aims and objectives are to make sure that this programme is understood by national government and all the various departments that deal with rural development so that this can be replicated nationally,” says Nefolovhodwe, “and become a national programme that can assist rural communities.”