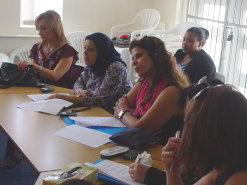 Iraqi activists gathered at Masimanyane’s
Zanempilo offices before their South
African tour. They learned how their
colleagues used their collective power
to advance during and after apartheid.
(Image: Shamin Chibba) 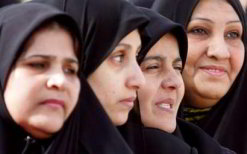 Iraq has historically upheld the rights of
women, but in today’s times those rights
have been neglected and suppressed.
(Images: The Muslim Woman)

It was once one of the more progressive Middle Eastern nations with some of its laws allowing women to enjoy the same rights as their Western counterparts.

Nowadays, women’s rights in Iraq are deteriorating and with the US-led war entering its eighth year, more decline looks inevitable.

However, there are a number of women who are intent on stopping the rot by challenging the system and putting women back onto the path of progress.

The Masimanyane Women’s Support Centre, based in East London, hosted 12 Iraqi gender activists as they toured the Eastern Cape and Cape Town at the end of January. The visit was part of a leadership training programme run by humanitarian organisation Norwegian Church Aid (NCA).

According to Rachel Eapen Paul of the NCA, the aim of the visit was to expose the Iraqi women to Masimanyane’s model of working, especially with advocacy.

“We wanted them to see how Masimanyane intervenes in society’s structure.”

“We wanted to teach them how a democratic society works. Iraq, like South Africa 17 years ago, is a country in transition. The women wanted to see how to enhance their position. Therefore, we exposed them to women leaders so as to build their capacity and knowledge.”

The women were from different parts of Iraq and each are heads of their respective organisations.

They spent the first three days in East London, learning about women in politics and the media. They then jetted off to Cape Town where they met the likes of Pregs Govendor, deputy chairperson of the South African Human Rights Commission, and Yvette Abrahams of the Commission on Gender Equality.

The ladies ended their trip with visits to the historic District Six Museum and Iziko Slave Lodge and former penal colony Robben Island before departing for Istanbul.

Sundus Abbas, director of the Women’s Leadership Institute in Iraq, said the week provided the women with a platform for them to share their experiences.

“South Africa, like Iraq, has lots of violence. Our social structures are similar in that there is polygamy and contractual marriages.”

Foster countered Abbas’ statement by saying Iraq’s situation is different in numerous ways, and is difficult to manage, especially in terms of religion. Currently, Iraq’s constitution cites Islam as the official religion of the state and as a basic source of legislation.

“They have a stronger religious community than ours,” she said. “Their society is ruled by religion. They are also a society at war and under occupation.”

Foster did acknowledge that both countries are experiencing high levels of violence and are very patriarchal.

Abbas said Iraqi women could learn how to intervene in structures built by society.

“We do not have a space in court for women, like South Africa does. We need this. I also want to explore gender budgeting, which SA has too.”

However, Abbas stated that to trying to achieve any goals in her country is not easy, as the state is not very strong and often targets women.

“We want the constitution to protect us and to respect international treaties.”

Just being alive is an achievement

Foster said the activists from SA would also gain from learning about Iraqi experiences. For some Iraqi women, just getting through a day is what matters more than anything else.

“When I once asked the women what their greatest achievement was, they said, ‘Being alive'”.

Foster tried to build what she called “conceptual clarity” into her talks with the women. “I asked, ‘What is discrimination of women?’ and ‘How do we stop it?'”

Masimanyane’s work with the Iraqi women began four years ago when Foster conducted workshops for them. They have been meeting in other parts of the Middle East, except for Iraq because of the volatile environment. Some meetings took place in Jordan, where the NCA is headquartered.

“It is too dangerous to get into Iraq. By meeting these women in difference countries we are allowing them to get out of those stressful situations,” said Foster.

The NCA has worked with women’s organisations in Iraq since 2004, and were involved in other development projects in the country before war broke out in 2003. Since then the NCA’s focus has been on human rights issues.

“As the NCA we have to support women’s organisations in Iraq because they are a young, emerging democracy,” said Paul.