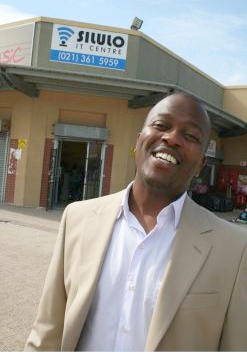 Luvuyo Rani’s Silulo Ulutho Internet Café, which started out as a small business in Khayelitsha on the Cape Flats, is changing the lives of students and adults who would otherwise have no opportunity to become computer literate.
(Image: silulo.blogspot.com)

A South African entrepreneur is providing residents from some of the country’s most impoverished areas with an opportunity to access the internet and learn about computers.

Luvuyo Rani’s Silulo Ulutho Internet Café, which started out as a small business in Khayelitsha on the Cape Flats, is changing the lives of students and adults who would otherwise have no opportunity to become computer literate.

Since 2004 when Rani first opened the business with his brother and a friend, the demand for Silulo Ulutho’s services has grown so much that he’s opened 18 stores in Khayelitsha and five in the Eastern Cape in Queenstown, Butterworth, Mthatha and East London.

Through these centres at least 10 000 students have been educated, right up to advanced computer literacy programmes.

It all started eight years ago when Rani, who worked as a teacher in Khayelitsha for five years, started selling refurbished computers out of the boot of his car in the Western Cape township.

Little did he know that his creative idea would grow to become a successful and award-winning business.

“People told me I was crazy,” Rani says, who started the business without any funding.

But he had a dream, and he was determined to make it work.

“I always knew it would work because I saw then, and still see now, many opportunities in the ICT sector in the townships,” he says.

“At the time when I was teaching, the Department of Education was just starting to introduce Outcomes Based Education and teachers needed computers,” he says.

But soon after selling the computers, Rani found out that the teachers weren’t using them at all.

“They were gathering dust and this bothered me,” he says. “The teachers had no skills to use them, and they didn’t have access to the internet.”

This is what sparked his idea to start a business that would give people in Khayelitsha access to the internet and teach them how to use computers as well as how to access the information stored on the web.

Within a year of starting up, he won best entrepreneur in the Western Cape.

“And then it all grew very, very fast,” he recalls.

Initially, his main goal was to use the facility as a computer skills training venue for teachers, but soon the business started to meet a major need for computer services in Khayelitsha.

“People needed help. They could operate Facebook, but didn’t have the skills to type out their own CVs. People couldn’t differentiate between a fax and email,” he says.

The absence of computer skills, or the technology and facilities to learn, is a dilemma for many people living in townships and remote areas in South Africa.

“If you don’t have computer skills, you are at a disadvantage in the job market,” says Rani.

To add to this predicament, people often have to travel long distances to an internet café to distribute their CVs when searching for jobs.

“People have to do this at great expense and it takes a lot of time,” he explains.

The Silulo Internet Café caters for both needs, and Rani has ensured that the pricing of his services are within reach of the majority of South Africans.

“What is central to my business model is affordability,” he says. “Our prices are low.”

He believes that companies operating in emerging market economies should adjust their business models and profit expectations.

“It is essential for entrepreneurs in these markets to be socially minded and not only profit-driven,” he says.

“This is simply unaffordable for most people,” he says. “Even if you just have R2 (23 cents), you can go onto the internet for 15 minutes.”

Silulo Ulutho operates in the Western and Eastern Cape, but in the future Rani would like to grow the business in other provinces, possibly through a franchise business model.

“But the core must always remain that the business must benefit the community,” he says. “I am passionate about this.”

In addition to internet café services, computer sales are still a core part of the business. Silulo offers IT support to assist customers with network connections, computer repairs, and maintenance, and software installation.

As part of its computer sales division, Rani has entered into a partnership with mobile provider Vodacom. Customers who buy computers from Silulo can access prepaid internet services using a 3G connection from Vodacom, the dongle for which is part of the deal.

Rani believes there is nothing stopping more entrepreneurs from building successful businesses that can also impact society positively.

“What we need is innovation. Young entrepreneurs must inspire and give hope to other young black people that they can do it if they work hard,” he says.

He spoke out against entrepreneurs who want to achieve quick riches. “With transformation more people have been afforded opportunities, but this system is abused and people take shortcuts,” he says.

He maintains the only way to grow a business is through hard work and commitment.

“My advice to young entrepreneurs is to focus on your business and do it better than anyone else. Always maintain good business values, integrity and humility.”

Thinking back on his childhood, Rani says he always had an interest in business.

“My mother ran a tavern and I grew up in this environment which exposed me to entrepreneurship,” he says, remembering how he watched her run the business and interact with customers.

“This shaped me more than anything.”