A South African initiative that uses group buying power to lower food prices for needy communities, using a mobile app, has been nominated for the continental prize.

Nokwethu Khojane and her business partner, Lauren Drake, saw a need and found a solution: their social enterprise, Lakheni, uses the buying power of whole communities to lower the price of staple food. It also provides a means for day care centres to generate income.

A poverty tax is imposed on people who live a long way from grocery stores. The added cost of travel eats into money that poor families should spend on groceries. In response, Khojane and Drake founded Lakheni, a group buying club that combines orders from a community, and uses the buying power of the group to get better prices.

“At the bottom of the pyramid, distribution is very inefficient because of the small amounts that individuals buy. But there’s value when you start aggregating that demand, because the numbers are there — they’re just fragmented,” Khojane told Fast Company magazine.

Lakheni takes bulk orders for staples such as maize, sugar and oil every month through local day care centres. Customers deposit their payments into a bank account that Lakheni uses to order in bulk from suppliers.

Orders are delivered to the day care centres, which earn a fee for processing the communities’ orders, or to spaza shops, which also benefit from Lakheni’s bulk ordering. Using the system saves customers about 30%, including the savings on transport.

When they began, Khojane, Drake and the centres they signed up took orders using a pencil and notepad. Now they have developed a mobile app that can be used to take orders and handle payments.

Nokwethu’s innovation — using a mobile app to increase the buying power of families in poorer communities — earned her a nomination for the Innovation Prize for Africa. While Lakheni has concentrated on groceries, the prize money would help it to develop the app further. The partners are looking at ways to include financial services as well.

They were whittled down from 2,530 innovators in 48 African countries. Nominees include innovators from Zimbabwe, Liberia, Democratic Republic of Congo, Nigeria and Kenya. The nominated innovations show that Africa can drive its own growth and prosperity.

Walter Fust, chairman of the AIF board, said: “Given the instrumental role African women play in transforming Africa, it is thrilling to see more women among the 10 nominees with game-changing innovations. By providing platforms to recognise innovation excellence in Africa and mobilising for African innovators, we continue to live up to our credo of engaging, inspiring and transforming.”

This was “a strong indication of the creative potential that exists in Africa”.

Adenle’s software understands and digitises spoken African languages, presenting them as a text. It allows Africans to interact more easily with hardware and call centres, using their local languages.

Lokole creates a shareable local network that makes it up to 1,000 times cheaper to access emails and social media by sharing the costs.

Atlan Space software is used to manage drones that are, for now, used to monitor illegal fishing and deep sea dumping off the coast of Africa.

The patented Smart Electro-Mechanical Actuator Journal Integrated Bearing, or SEMAJIB, is an oil filled bearing that allows it to change characteristics as it operates. The SEMAJIB enables one bearing to be used across multiple systems.

Dougbeh-Chris Nyan, Liberia: New Technology for Rapid Detection of Many Infections Using Only One Test

Nyan developed one simple test to detect seven different infections from one sample within 40 minutes. The diagnostic tool is simple to use and inexpensive to produce.

The Sweat TB Test is a non-invasive rapid diagnostic skin test to detect tuberculosis. It is simple enough to use in rural areas where the largest number of new infections occur. It tests for specific markers in saliva and produces results within 10 minutes.

Designed for use in areas with poor internet connectivity and intermittent power, the Dr CADx is a software solution that helps doctors and healthcare workers read medical images more accurately.

The Electronically Controlled Gravity Feed Infusion Set, or ECGF, is a medical device designed to accurately administer intravenous fluids and drugs by controlling the rate of fluid flow based on feedback from a drop sensor. 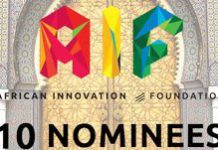