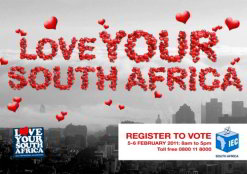 The Independent Electoral Commission
says more South Africans are interested
in the forthcoming local elections than
was the case five years ago, and most
are satisfied with the way the IEC
is handling the event.
(Image: IEC)

Results of a survey commissioned by the Independent Electoral Commission (IEC) have revealed that 79% of citizens intend to vote in the local elections on 18 May, while just 21% will abstain.

Voting interest among South Africans was generally higher with over 90% expressing satisfaction with regards to the country’s voting process.

About 500 specific areas were visited with seven households selected in each area and face to face interviews conducted in the language of the respondents. Those interviewed were aged 16 and older and ran across different race and ethnic groups.

The IEC says it commissioned the research, conducted by the Human Science Research Council, to assess voter readiness ahead of the local government elections on 18 May. The research will be used in their ongoing preparations for elections and assess where they need to improve.

Political disinterest and disillusionment was the primary reason given by those not intending to vote in the upcoming election. Those interviewed display some levels of mistrust for politicians and expressed disappointment at delivery levels by municipalities.

Some admitted that party loyalty rather than abstention remained their key electoral response to political parties not delivering effectively on their mandate.

Researchers also found that political interest increased slightly from 2004 but levels remained relatively low at 42%. About 58% of the respondents expressed awareness of local governance structures such as ward committees, with this awareness most seen among poor citizens.

However, satisfaction with democracy declined slightly over the past decade and this was coupled with lower levels of trust in core political institutions. Interesting was the increase in the level of trust for the South African Broadcasting Corporation with respondents expressing confidence with the public broadcaster, religious groups and the IEC.

An overwhelming number of South Africans were also satisfied with the registration process and 98% found it easy with 58% reporting to have taken 10 minutes or less to register.

In terms of view on municipal performance, 45% expressed dissatisfaction with municipal services and their confidence dropped in relation to Batho Pele principles.

In addition, most voters hold the IEC in high esteem for its “efficiency and professionalism”. Trust in the IEC increased by 19% between 1999 and 2010.

There also seems to be fairly high awareness of the IEC (86%) but knowledge about the commission remained limited at 56% while 17% of respondents said they had no knowledge of what the body does.

But lead researcher Udesh Pillay from the HSRC said very few voters, about 13%, thought irregularities had occurred during the previous local government election held in 2006, while 86% said they have never personally experienced any irregularity.

Pillay said: “The general feeling was that the majority is satisfied with the way things are done and how the IEC conducts its business I ‘m sure the IEC would like to see the number increase but general is satisfactory”.

He went on to attribute the decline in satisfaction with democracy with increased in unemployment, the economic situation of 2008 and anxieties sparked by the dramatic political transition leading to the 2009 general elections.