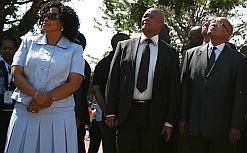 Gauteng premier, Nomvula Mokonyane;
the minister of justice and constitutional
development, Jeff Radebe; and,
President Jacob Zuma look at one of the
10 pillars at Walter Sisulu Square in
Kliptown, in Soweto, where the
Freedom Charter was born. 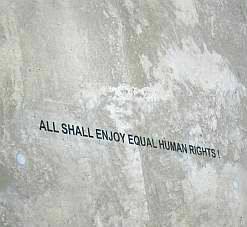 One of the pillars of the Freedom Charter
is that “all shall enjoy equal human rights”
which was being commemorated at
the event.
(Images: Ray Maota)

The commemoration of Human Rights Day in South Africa this year coincided with the 16th anniversary of the adoption of the Constitution of the Republic, which gives full expression to its democratic ideals.

This year’s official observances were attended by President Jacob Zuma on 21 March at Walter Sisulu Square of Dedication in Kliptown, in Soweto.

Also at the event were the Congress of the People (Cope) president, Mosioua Lekota; the deputy president of South Africa, Kgalema Motlanthe; the City of Joburg mayor, Parks Tau; the Gauteng premier, Nomvula Mokonyane; and the minister of justice and constitutional development, Jeff Radebe.

Although there was much debate about why the official gathering was held in Soweto instead of Sharpeville, where the massacre took place in 1960, Walter Sisulu Square in Kliptown also holds much significance for the day.

Lekota also said that Human Rights Day was for all South Africans and not just for a particular area. “When Indians were forcibly removed it was a human rights violation,” said Lekota.

In his message of support, he said political parties had a duty to educate South Africans that human rights were not about the Sharpeville and Langa massacres.

The square has historical significance as the meeting point of over 3 000 representatives of apartheid resistance organisations on 26 June 1955. This group organised themselves as the Congress of the People and it is here that the Freedom Charter was born.

The charter is a document outlining the group’s views on a commitment to a non-racial South Africa. It is characterised by its opening demand: “The people shall govern”.

It calls for democracy and human rights for all, land reform, labour rights, and nationalisation. It is the base from which the Constitution of South Africa was derived.

The charter spells out that South Africa belongs to all who live in it, black and white; that South Africa will never be prosperous or free until all people live in brotherhood, enjoying equal rights and opportunities; and, only a democratic state, based on the will of all the people, can secure to all their birthright without distinction of colour, race, sex or belief.

Paying tribute to those who lost their lives

The commemoration of Human Rights Day on 21 March pays tribute to those who lost their lives in Sharpeville on 21 March 1960, during a peaceful protest against the pass laws.

In Kliptown this year, the atmosphere was celebratory, with about 500 people outside the Walter Sisulu Hall and about 150 seated inside.

Zuma said: “On this solemn occasion we extend a special greeting to all South Africans who suffered gross human rights violations during colonial oppression and the apartheid period.

“In their memory, we worked hard to develop a progressive Constitution of the Republic, which enshrines the human rights of all our people, in a Bill of Rights.”

Zuma said that the Constitution had its roots mainly in five documents or processes – the 1923 Bill of Rights, the African Claims of 1943, the Women’s Charter of 1954, the Freedom Charter of 1955 and the ANC’s 1988 Constitutional Principles for a Democratic South Africa.

On the day, Lekota, previously an ANC leader and now the head of Cope, a breakaway party, hugged Zuma and reiterated that the day was for all South Africans and not for a single party.

Zuma, Tau, Mokonyane and Radebe walked along the square to the 10 pillars, where they read what was enshrined in the Freedom Charter before moving to the hall to address people on the importance of the day.