Lufhereng will become a modern
township once all 24 000 to 25 000
houses are completed. 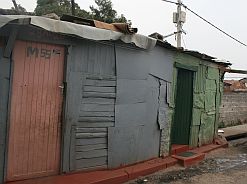 These two shacks are part of many others
in the sprawling township of Alexandra.

Mortgage houses are available for the
middle-class in emerging suburbs like
Protea North.
(Images: Bongani Nkosi)

The massive task of replacing informal settlements with more habitable houses is “steadily taking shape”, according to South Africa’s Department of Human Settlements.

Up to 206 informal settlements have already had shacks replaced with proper houses, according to the department, and work is under way in at least 335 additional imijondolo, as the shack slums are known in isiZulu.

Minister Tokyo Sexwale told Parliament on 19 April 2011 that his department had earmarked and finalised plans to upgrade 1 100 such residential areas across the country.

In total, the department is looking at tackling 2 700 informal settlements in South Africa, all of which need proper housing. These areas, located outside cities, mostly accommodate low-income families.

As part of its National Upgrading Support Programme launched in February 2010, the department has a mandate to eradicate at least 500 000 shacks in informal settlements by 2014.

“… There is an accelerated delivery of quality houses that remains undiminished,” Sexwale said. “There is greater clarity on the nature and severity of problems confronting the country’s residential drive.”

Sexwale said despite challenges, their finances are now being coordinated better to ensure success of their housing projects. His department’s officials are working closely with 49 municipalities to ensure that they are able to deliver the much-needed houses.

Progress in other areas

Freedom Park, a community outside Johannesburg, is one of the examples where the government has managed to replace the bulk of shacks with low-cost housing over the years. Only a few shacks remain in the settlement.

Government-built houses also dominate most parts of Kliptown, a location in the middle of Soweto, although shacks still dominate parts of the massive township.

Some residents from the Protea South informal settlement in Soweto were moved to Lufhereng, the biggest social housing project in Gauteng, in August 2010. Lufhereng will have between 24 000 and 25 000 units once complete, and will accommodate residents from Protea South and former farm dwellers and labourers.

Although progressing at a slow pace, shack replacement projects are afoot in many settlements surrounding Johannesburg. The city’s council has undertaken to eradicate all 100 slums currently existing on its perimeter.

The Alexandra Renewal Project is also making headway in providing decent housing in Alexandra, one of Johannesburg’s oldest townships, where most people still live in shacks. About 1 600 low-cost houses were handed over to beneficiaries in 2010 and some semi high-rise buildings have also been built in the township.

Major municipalities like the City of Johannesburg will now be able to initiate their own housing projects. They will no longer have to wait for approval and funding from provincial governments to pursue projects in areas under their jurisdiction.

This is likely to cut out much of the red tape involved in allocation of funds. According to Sexwale, the move will help speed up delivery of housing.

“This means that, for the first time ever, funds will be directed straight from the national department into the coffers of these municipalities,” said Sexwale.

Seven other municipalities to benefit from the new policy are the City of Tshwane, Nelson Mandela Bay, eThekwini Metro, Ekurhuleni Metro, City of Cape Town and Francis Baard and Pixley Ka Seme district municipalities. All are under pressure to replace shack areas with proper housing.

Apart from providing fully subsidised houses, the government has also embarked on rental housing projects in and around the cities.

The units cater for people working and living in the areas. Joshco has earned a UN award for its work in turning a number of dilapidated buildings in Johannesburg into decent low-rental units.