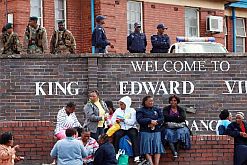 King Edward VIII is one of the hospitals
to be revamped.
(Image: African View) 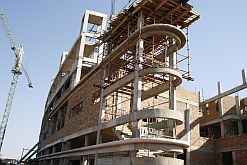 A new hospital being built in Soweto will
ease the pressure off Baragwanath.
(Image: Bongani Nkosi)

As part of South Africa’s revamped approach to healthcare, the country is set to spend more on upgrading its five largest public hospitals than it did on building stadiums for the 2010 Fifa World Cup.

The total cost of the five projects is estimated to be “much more than that of building of stadia,” health minister Aaron Motsoaledi said in a statement after a meeting with those involved in the project at the Inkosi Albert Luthuli Central Hospital on 27 September.

Describing the investment as “massive”, Motsoaledi said: “The situation in infrastructure budgeting is as if we have 10 countries in one.”

Task teams have been set up to plan the revamping projects, with the department using lessons drawn from the construction and renovation of 10 stadiums for the World Cup. “We need to discard what has not worked and cherish what has worked,” Motsoaledi said.

Funding for the projects

Finance minister Pravin Gordhan announced the renovation plans in the 2010/2011 national budget speech in May. Moussad Shaker, an engineer involved in the planning process, said R7.6-billion (US$1.1-billion) has been budgeted for public hospital upgrades this financial year alone. For the World Cup, the government invested R8.4 billion ($2-billion) in stadium projects.

The Development Bank of South Africa is to help fund the projects.

“To revitalise public hospitals would take us up to 10 years at the least,” said Shaker.

All five hospitals are key to the poorer townships and rural areas, where they provide referral services; that is the main reason they are being prioritised.

Part of the reason the upgrades were necessary was that no infrastructure maintenance had been done on the hospitals. Motsoaledi said that in the new project, engineers will be appointed for management, not just for construction work.

The projects are part of preparations for the National Health Insurance (NHI) that the government plans to introduce by 2012. The NHI will secure medical insurance for all South Africans, ensuring that even the poor have access to private healthcare facilities.

“During the development of the 10-point programme we identified the acceleration of infrastructure development as one of the key pillars for health transformation as well as in preparation for the implementation of the National Health Insurance,” Motsoaledi said.