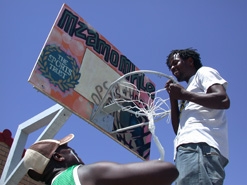 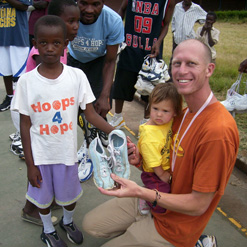 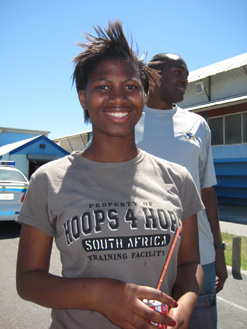 Zanele Manyube and Thierry Kita.
Manyube, who has been with Hoops 4
Hope since she was eight years old, is
now an All Star, responsible for 100
children.

Hoops 4 Hope (H4H) is a Cape Town-based non-profit organisation that uses sport as a channel to reach children (aged from eight to 16) from impoverished communities and teach them life skills. It was started 13 years ago by former US exchange student and basketball player, Mark Crandall, and local basketball heavyweight Thierry Kita.

The duo, who both have a passion for community work, believe that sport is a powerful way to get youth off the streets. They use this opportunity to empower them with tools to help them become responsible young people who are able to make informed choices about the challenges they are faced with daily.

Children among the groups who show leadership potential are “promoted” to become MVPs (most valuable people) and they take over the coaching and life skills training on a voluntary basis. MVPs who are interested then graduate to become All Stars, a salaried full-time position at H4H. They are given the responsibility of managing an entire community, which involves setting up teams, registering them for basketball league, organising tournaments and liaising with the MVPs.

They also have about 100 volunteers from South Africa and abroad. With the help of community members, H4H has built about 29 basketball courts in 12 communities.

“Together they manage Freedom Day programmes with 500 kids, Youth Day with 600 kids and World Aids Day with 1 000 kids; and they run these events with absolutely no pressure,” Kita says about his young team. He describes the MVPs and All Stars as the “heart and soul of the programme”.

“Our model is based on getting young people educating and mentoring young people,” says Crandall. “They can talk about sensitive issues to their peers while building trust, respect and friendship – in their own communities and their own language. We are also building role models that the communities need.”

Zanele Manyube is one such role model. She first got involved with H4H when she was eight years old and has been with them ever since. This 19-year-old “went up the ranks”, first becoming an MVP, then an All Star and is now responsible for 100 children from four different schools.

She credits part of H4H’s success to the small groups that give children, who wouldn’t necessarily speak up in class, an opportunity to come out of their shell. Furthermore, the rowdy ones who are disruptive in class tend to behave well in a sporting environment. “The H4H teams are divided into groups of 12-to-15 children and the genders are split up. Our life skills programme is interactive and involves a lot of role playing, which is something that a teacher with 45 children in a co-ed class does not get the opportunity to do.”

Manyube says H4H contributed to her making “strange choices that have kept me on the right road”. She lists the insidiousness of peer pressure among the things that she has learned. “Some friends can put pressure on you in such a way that you think you’re still in control, but in actual fact you’re not. H4H gives you guidance, but does not make choices for you. I do not regret any of the choices I’ve made, because they’ve been informed choices.”

“Zanele is a perfect example of the cycle we’re trying to create in getting the kids involved,” says Crandall about his apprentice. “She is a role model who is teaching children who in turn can be role models for the next generation.”

One hundred teenagers who show the most promise are scouted from all over the continent by three NBA coaches. They are flown to Johannesburg where they spend an entire week with 20 NBA coaches and 10 NBA players, while H4H takes care of the life skills element. Says Kita: “I am encouraged to see our All Stars successfully managing this camp. The NBA reckons we run the best life skills programme out of all the NBA Basketball Without Borders, including Europe and China.”

In fact, the Live for Life programme was instrumental in getting H4H funding for Ukusa (isiXhosa for “a new dawn”), the drug and substance abuse intervention programme they’re launching in May this year. “We started acknowledging that tik is a huge problem among Western Cape youth, so we actively looked for sponsorship,” says Kita. “The United Nations Office of Drugs and Crime (UNODC) acknowledged the potential we have in dealing with HIV/Aids and recognised that we are the best people for the job.”

Ukusa’s success can be attributed to its high retention of youth, through sports. “The closer we keep them to H4H, the higher their chances of beating drug and substance abuse,” Kita says.

Another big Skills for Life tool is conflict mediation. H4H is running an inter-cultural programme where every month they bring together children from different races, cultures, genders and economic and social backgrounds. These monthly events culminate in a big annual event where H4H also brings in schools from the US and Europe. “Sport has a cross-cultural understanding, it is an equaliser that puts you in a neutral place and allows you to learn a lot through each other,” says Crandall.

H4H’s latest offshoot is Soccer 4 Hope (S4H) in partnership with Grassroots Soccer, which works very closely with Fifa. “We launched S4H in March 2007 in two schools with two coordinators,” says Kita. “We are now in 16 schools and have 24 coordinators. The growth has been quick, but that is the power of soccer! We’ve even been sponsored with a Mercedes Benz Sprinter bus.”

“We mirrored the same programme as H4H,” Crandall adds. “So it was an easy transition. But this time we’re focussing on girls, who have been hugely left out. This is not about creating the best soccer team, but getting kids off the streets, about saving lives.”

But that is not to say that their children aren’t at the top of their games. In fact, basketball players who have gone through the H4H rights of passage have always been some of the best in the Western Province, and others have even gone national.

“Our strength remains life skills, and as such we have created lessons that help girls deal with challenges associated with gender and risk, and gender and culture,” Kita continues. “It is extremely difficult to be a girl in Africa with the challenges of HIV/Aids and gender violence being part of the culture.”

H4H, which recently launched in Xai-Xai, Mozambique, has its biggest programme in Zimbabwe, where about 7 800 children participate on a daily basis. “Zim produces a lot of excitement for the youth,” says Kita. “We’re effectively running leagues and championships there. Last month we shipped a container full of sporting goods and a school bus, which allows the kids to move from one competition to the next.”

Crandall picks up the story. “We call that our miracle shipment because it arrived in Zim and cleared customs two weeks before the elections! This was a 40ft container with 6 000 pairs of sneakers crammed into a typical American, 20-passenger yellow school bus.”

H4H has always had a big reaction in the US – where both Crandall and Kita raise funds – and that response continues to grow. They receive shipments of uniforms and sneakers and other equipment. “These things are the hardest for kids to get here, yet in the US kids get a new pair of sneakers all the time, and schools can afford to get new uniforms every five years or so,” says Crandall. “The power of a uniform is that it is a suit of armour for an athlete, it sets him or her apart from the rest.”

Crandall spends six months of the year back home in the US where he runs summer basketball camps. “When I show the kids there pictures of where I spend half of the year, they want to be involved. We’ve created a movement in the US where advantaged kids organise sneaker drives in schools. We encourage them to write messages to the recipients on the sneakers. An 11-year-old recently organised a basketball fundraiser with his friends where he raised US $300 in one day. Another kid did an ad for H4H on You Tube. We get emails from kids who say their birthdays or bar mitzvahs are coming up, and they want to use this special day to support other kids. That is the power of sport; the kids connect to the idea of being able to help other kids and they are excited to communicate through soccer or basketball.”

H4H has cultivated relationships with international universities, and students volunteer with H4H because “they know we run successful youth programmes”, says Kita. “Kids fundraise to come here. Right now we have a kid from San Francisco who did a sneaker drive to raise funds to get here.”

A few months ago H4H opened an office in New York to be able to raise funds more effectively. The organisation has the support of celebrity New York DJ Bobbito Garcia, who gets celebrities such as basketball legend Magic Johnson and singer/rapper Missy Elliot to donate signed sneakers. These are auctioned to raise funds for H4H. Garcia has also done a You Tube ad for H4H on ESPN.

Kita is a guest assistant coach with the NBA’s New York Knicks and Boston Celtics. He has a great relationship with the two teams, which he spends time with during the NBA season. Two of the NBA’s top coaches, Larry Brown and Doc Rivers, also support H4H’s fundraising initiatives.

One of H4H’s major challenges, though, is securing local funding. “There is such a high demand among communities that want to be involved that we need to hire more people,” says Kita. “The problem is that we’re perceived as a sporting organisation, but if you come half a step closer, you’ll see that our activities are actually life skills. What we do can affect many kids’ behavioural changes, which is key. We recently did a fundraising drive with local Glamour magazine, and that opened a lot of doors, but we have to do more.”

Where to from here?

H4H has recently opened a youth centre in partnership with Ikamva Labantu, also a non-profit organisation, at the Guguletu Sports Centre in Cape Town. The centre is open daily and young people can participate in a wide range of sporting activities, including chess. There is also a computer centre and HIV testing and counselling services.

“As part of our extension plan we have outreach programmes running in Limpopo and Johannesburg,” says Kita. “By next year we will be running fully in Limpopo and the Eastern Cape, and in the next three-to-five years we will have a programme running in Soweto.”