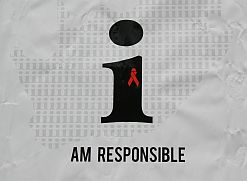 The new campaign to encourage all South
Africans to get tested for HIV.

South Africa entered a new era in the fight against HIV/Aids on 1 December, as President Jacob Zuma introduced a radical plan to boost protection of affected individuals and prevent further infections.

Zuma’s announcement at a World Aids Day event in Pretoria focused on fast-tracking the distribution of antiretroviral drugs (ARVs) in the country – a move praised by the Treatment Action Campaign lobby group and the South African National Aids Council, which makes HIV/Aids policy recommendations to government.

Under the new plan, ARVs will be made available to HIV-positive South Africans with a CD4 cell count of 350, as opposed to the current qualifier of a CD4 count of 200 or less. Experts say that by starting treatment earlier, chances of success are higher and people can live longer.

A CD4 cell count indicates the strength of a person’s immune system, and helps determine how advanced the HIV infection is and predict the risk of complications.

Normal CD4 counts in adults range from 500 to 1 200, but when a person has HIV his or her count slowly decreases. ARVs help the body build up its CD4 count which, in turn, help fight against opportunist infections.

Zuma also said that tuberculosis (TB) and HIV/Aids “will now be treated under one roof” instead of patients having to travel to different centres, and those with both illnesses will receive ARVs when their CD4 count is 350, not 200.

“This policy change will address early reported deaths arising from undetected TB infection among those who are infected with HIV,” the president said at the event, which was attended by thousands of South Africans and many international dignitaries.

TB is a prime example of opportunistic disease and government’s new approach is significant because the co-infection rate among affected South Africans is as high as 73%, Zuma added.

The plan also focuses on curbing mortality among infants who test positive for HIV at birth. Zuma announced that all such babies under one year of age will now receive ARV treatment.

In this case “initiating treatment will not be determined by the level of CD4 cells,” he said. “This decision will contribute significantly towards the reduction of infant mortality over time.”

In addition, symptom-free HIV-positive pregnant with a CD4 count above 350 will be put on treatment at 14 weeks to reduce the chance of mother-to-child transmission. “In the past treatment was only started during the last term of pregnancy,” he added.

At the event US Ambassador to South Africa Donald Gips announced that his country will donate R900-million (about US$123-million) to broaden access to ARVs in South Africa over the next two years.

During his address Zuma emphasised the shift in government’s HIV/Aids policies from those of his predecessor, Thabo Mbeki.

After Mbeki became president in 1999 he increasingly argued that HIV was not the cause of Aids and that ARVs were not an effective treatment option, which caused an uproar locally and abroad.

His approach was supported by then Health Minister Manto Tshabalala-Msimang, who also incurred international condemnation for promoting herbal remedies as a viable alternative to ARVs. This had a severe impact on the national treatment programme and roll-out of ARV drugs.

When Zuma became president in May 2009 and Aaron Motsoaledi replaced Hogan, this positive trend continued.

Government’s new plan will be effective from April 2010 and it will work towards increasing the number of treatment centres across the country.

“Institutions are hard at work to ensure that systems are in place by the 31st of March,” the president said.

The policy shifts mean that “we will be treating significantly larger numbers of HIV-positive patients. It means that people will live longer and more fulfilling lives,” Zuma said. “But it does not mean that we should be irresponsible in our sexual practices.

A campaign for change

Government also launched the “I am responsible” campaign at the event. Motsoaledi described it as a “massive” drive that will spread awareness about the epidemic, which has resulted in the death of more than 2.5-million South Africans over the last decade.

The campaign’s main goal is to encourage as many South Africans as possible to get tested for HIV. “Every South African should know his or her HIV status,” Zuma said.

The president announced that he’s made plans to be tested for HIV as part of the new campaign, even though he was tested recently. “I urge you to start planning for your own tests,” he said. Results are always confidential.

Zuma urged young people to be more responsible, saying the future belongs to them. “Be responsible and do not expose yourself to risks. We can eliminate the scourge of HIV if all South Africans take responsibility for their actions.”

The South Africa National Aids Council (Sanac) commended government’s commitment. “We can change behaviour if we reach out to every person in South Africa,” said Sanac deputy chairperson Mark Heywood. “I believe that starting from today, with the leadership of government, we will defeat HIV.”

The Treatment Action Campaign also welcomed government’s announcement. “The changes to the treatment guidelines are all based on strong medical evidence and will significantly reduce mortality,” it said in a statement.

Hundreds of young people queued up to be tested at the event. New Start, one of the centres, tested more than 50 people within six hours, according to programme manager Ncamsile Nhlabathi.

“People will respond positively to this new campaign. It shows that they do want to get tested,” she said.

Octovia Kebareng Maditse from Pretoria was among those who got tested. “I wanted to know my status. I feel free now that I know,” she said.