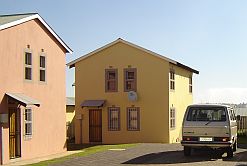 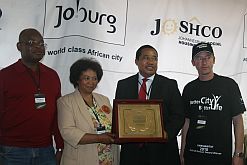 Joshco was awarded the UN-Habitat
Scroll of Honour in Singapore. 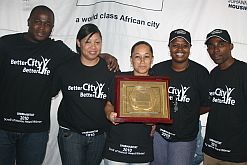 Joshco’s employees are proud of the award.
(Images: Bongani Nkosi)

A dynamic social housing scheme in Johannesburg is helping transform run-down residences into affordable, quality living spaces for families in the city.

The driving force behind this initiative is the Johannesburg Social Housing Company (Joshco), which was launched six years ago as an agency of the City of Johannesburg. Its mandate is to reverse building decay in the city and provide more comfortable homes for residents.

One of the buildings to be revamped is Vannin Court, a block of flats in Johannesburg’s densely populated Hillbrow district. As it stands now, it doesn’t look like a very hospitable place.

Clothes hang from windows and a stench oozes from its damp external walls. Some windows are broken and covered with bits of old cardboard boxes.

Someone who hasn’t walked the streets of Hillbrow recently could be forgiven for thinking that it’s all grime and gloom here, but things are changing.

Europa House on Claim Street was once a decrepit hotel where illegal activities, including prostitution, took place. It was renovated in 2005 and is now a decent block of flats that offers affordable homes for rent.

Not far from it is BG Alexander – a former nursing college that went through a patch of decay and even became infested with rats some years ago. It was refurbished at a cost of R10-million (US$1.5-million) and made fit for human accommodation in 2007. Apartments there can now be rented for as little as R600 ($88) per month.

“Those of you who have been keeping a close watch on the development of Johannesburg in recent years would attest to the changes that this city has undergone,” said Ruby Mathang, head of the housing department at the City of Johannesburg.

“The city, like most urban centres in the world, has experienced its gloomy days of decline, but it is now in an upward cycle and this has been the case for some 10 years or so.”

Joburg to be ‘endearing home for all’

Joshco has a “vision of turning Johannesburg into a distinctive metropole and an endearing home for all”, said Mathang.

It’s leading the renovations at BG Alexander, Europa House and 17 other projects, which involve refurbishments and building homes from scratch.

Joshco will begin work at Vannin Court soon. The agency said the building block will be “upgraded into good-quality, well-managed family apartments” that will be able to accommodate more than 50 families.

Since 2004 the agency has spent about R760-million ($111-million) on creating 8 300 homes. Its developments include Pennyville in Soweto, a new location with 2 800 low-cost, medium-rise rental apartments.

It also redeveloped former hostel Antea Village, in western Johannesburg, into 284 family-friendly units. Another residence that Joshco will give new life to is the Orlando Hostel in Soweto, where 102 apartments have already been completed.

Hostels were originally designed to accommodate single men who worked in Johannesburg, not for their families as well. But, “Joshco has redeveloped hostels from their former state as male compounds to integrated family units,” said Mathang.

Private companies such as City Property and Afhco are also playing a significant role in stamping out decay in Johannesburg. They have invested heavily in renovating residential and office blocks, especially in the city centre.

Joshco’s efforts in bringing back Johannesburg’s spark and creating homes across many districts have earned it international recognition. It recently won the 2010 UN-Habitat Scroll of Honour, alongside five other municipal-run housing schemes from Singapore, China, Austria, Colombia and Morocco.

The awards ceremony was held in Singapore on 4 October, World Habitat Day. Joshco’s employees got the chance to celebrate their win 10 days later at a function in Johannesburg.

“We’re encouraged by the award. I truly cannot exaggerate the encouragement this award has on the Joshco team,” said CEO Rory Gallocher.

UN-Habitat recognised the agency for having created habitable homes for more than 30 000 low-income residents, who pay their rates regularly. Joshco has received 84% of its total owed rent in the last year.

Although it’s social scheme, it is very strict on payments. “We’ve done evictions in Kliptown and we have very a high rate of payment in Alexandra,” Mathang said.

Joshco is the second South African housing project to have received the UN honour in as many years, after the Alexandra Redevelopment Project won it in 2009.