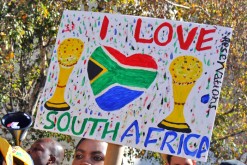 RELATED ARTICLES
• A legacy of harmony and pride
• Out of Africa, something new
• Top marks for SA’s World Cup
• Vuvuzelas conquer the world!
• SA ablaze as World Cup wraps up

On 24 September 2010, South Africa celebrates its national Heritage Day, which aims to highlight and promote the country’s diverse cultural expressions – such as music, languages, food, and craft – and heritage. These important factors together contribute significantly to nation building.

During this year’s Heritage Month, the South African government will celebrate the successes of the 2010 Fifa World Cup, and the contribution of all South Africans in making the tournament the triumph that it was.

While events will take place all around the country under the theme Celebrating 2010 Fifa World Cup successes: our heritage, the main gathering will be held at the Moses Mabhida Stadium in Durban on 24 September, with President Jacob Zuma in attendance.

South Africa’s globally acclaimed hosting of the World Cup has instilled a spirit of hope and the belief that the country can achieve even greater things.

“The successful hosting of the tournament has become part of our legacy and national heritage, and will always be a source of inspiration and hope to future generations,” said government spokesperson Themba Maseko.

‘Keep the spirit of ubuntu going’

Earlier in September, Arts and Culture Minister Lulu Xingwana urged South Africans to use Heritage Month to deepen the country’s humanity and unity, as they did during the World Cup.

Let us work together to sustain the spirit of ubuntu and patriotism that prevailed during the global event,” Xingwana said.

She urged South Africans to celebrate their collective achievements during the Fifa World Cup, from the building of infrastructure to the feeling of goodwill and exuberance that pervaded the country. The hard work and sacrifices of the various sectors of society during the World Cup is just cause for celebration this Heritage Day.

“We believe that it is important to sustain the positive memory [of the World Cup], and mobilise all the sectors of our society in the celebration of this distinctive period in the history of our country,” Xingwana said.

She added that it was important to keep the World Cup momentum going, and to commit as a nation to strive towards social cohesion.