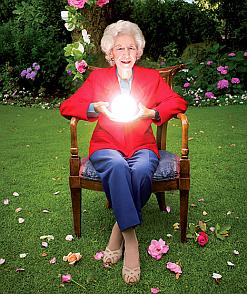 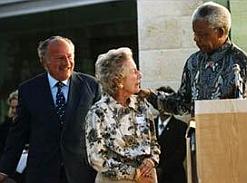 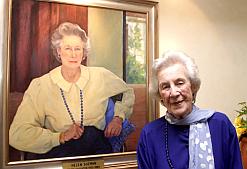 Suzman beside a portrait of herself.
(Image: Ilan Ossendryver, Jewish Web SA)

Helen Suzman, South Africa’s best known female politician and a vigorous anti-apartheid campaigner who was not afraid to stand alone against the government of the time, has died in Johannesburg at the age of 91. According to her family, Suzman passed away peacefully at her home on New Year’s Day, after a short illness.

Suzman fought with courage and spirit against the injustices of the previous regime and earned deep respect and regard from the international community. A two-time Nobel Peace Prize nominee, Suzman was a member of Parliament for 36 years. She spent 13 of those years as the lone representative of the Progressive Party, opposing the ruling National Party at every turn and speaking out for those who were denied a voice.

“Suzman was my mentor,” said Helen Zille, mayor of Cape Town and current opposition leader, recently voted the world’s top mayor. “She was opposed to the abuse of power by the old apartheid government, but she was also opposed to the current abuse of power by the current ANC government.” Zille heads the Democratic Alliance, which traces its roots back to Suzman’s Progressive Party.

Avrom Krengel, chair of the South African Zionist Federation, said in a statement, “We will miss her sorely. Her equal will not pass this way again soon.”

“She was indomitable, a powerhouse against apartheid,” said Archbishop Emeritus Desmond Tutu, adding that South Africa was poorer without her, and that the country owed her an enormous debt.

President Kgalema Motlanthe described Suzman as one of the few remaining voices of reason in the darkest days of South Africa’s history.

The Helen Suzman Foundation, established in her honour to promote liberal democratic values and human rights, paid tribute to its patron-in-chief, saying, “Whilst we mourn Helen’s passing we simultaneously celebrate … the essence of a remarkable woman whose spirit touched those she encountered, as much as her vigour and clear unambiguous sense of right and wrong inspired them.”

Suzman is survived by two daughters.

Suzman was born Helen Gavronsky in Germiston, east of Johannesburg, in 1917. Her parents were Lithuanian Jewish immigrants and, thanks to her father’s business skills, she and her sister grew up in a comfortable home and were able to attend Parktown Convent in Johannesburg, a top private school. She matriculated in 1933.

After dropping out of studies at the University of the Witwatersrand, she married in 1937 and then tackled her studies with renewed vigour, graduating with a degree in economics. She later became a lecturer in economic history at her alma mater, a post that she held until 1952 when she took the first steps into what was to be an illustrious career in politics.

Suzman’s Jewish upbringing instilled into her a deep sense of justice and fairness and the government’s controversial policies increasingly drew her attention. As a member of the mildly liberal United Party, South Africa’s ruling party from 1934 to 1948, she won a nomination to Parliament in 1953, representing the largely Jewish constituency of Houghton in Johannesburg.

The United Party, under the leadership of General Jan Smuts, had lost the 1948 election to the more right-wing National Party, which was steadily growing in strength. The United Party opposed apartheid but based its policies on continuing white control, which meant that it could never pose a serious threat to the National Party.

Because of this failure to commit to a definite policy on racism, dissatisfaction grew amongst the ranks of the United Party and in 1959 a breakaway group of politicians, Suzman among them, formed the more liberal Progressive Party. The agenda of the new party was simply equal rights for all South Africans, although until 1978 it qualified its stance with certain educational and property criteria. In 1977 it became the Progressive Federal Party.

Suzman was the only member of the Progressive Party to survive the election of 1961, and from this time until 1974 she stood alone in Parliament against the rampant discrimination and abuse of power that was tearing South Africa apart.

During these years she never let up for an instant, regularly confronting no less than three powerful apartheid Afrikaans prime ministers – HF Verwoerd, BJ Vorster and PW Botha. She fought with commitment for those affected by the apartheid system, building up a strong support base in her constituency, which ultimately extended far beyond the boundaries of Houghton.

And as an English-speaking Jewish woman standing up to conservative Afrikaans men in the House, she also worked for gender equality, a cause to which she consistently dedicated herself.

Death threats and intimidation did not deter her, and although her phones at home and work were tapped, she took great pleasure in damaging the ears of those listening in with a loud and high-pitched whistle right into the mouthpiece.

Suzman took up a number of other issues, including forced removals, police abuse of power, the abolition of capital punishment, and the treatment of imprisoned activists.

She visited the notorious maximum security prison on Robben Island a number of times to inspect the situation there, with the result that conditions for the inmates did improve. Because of her relentless efforts the prison authorities finally allowed political prisoners not only to receive books but also to enrol in correspondence courses of their choosing.

The South African Women for Women organisation, awarding Suzman its Ubuntu Award in 2001, stated in the citation that “by securing for political prisoners the right to books and study materials, she gave them the tools of sanity and humanity”.

Former president Nelson Mandela was one of those with whom she spent time during these visits, and the two remained friends ever since their first meeting in 1967.

In his autobiography Long Walk to Freedom, written in collaboration with Time managing editor Richard Stengel, Mandela wrote, “She made an inspection of our cells, and talked a bit with some of the other men. It was an odd and wonderful sight to see this courageous woman peering into our cells and strolling around our courtyard. She was the first and only woman ever to grace our cells.”

Suzman was not afraid to make herself unpopular, even among those she represented, as long as she felt she was doing the right thing. When sanctions against South Africa were proposed during the 1980s Suzman argued against them, saying that they would harm not only ordinary black South Africans but also neighbouring countries.

“I don’t see how wrecking the economy of the country will ensure a more stable and just society,” she said to a group of protesters in New York in 1986.

After 36 years in Parliament, Suzman retired in 1989 but continued a life in the public eye as president of the South African Institute of Race Relations between 1991 and 1993. She was a member of the Independent Electoral Commission, the organisation that held the reins of South Africa’s first democratic election in 1994, and a member of the Human Rights Commission from 1995 to 1998.

She was an avid golfer and held memberships of several golf clubs including Wanderers and Houghton. She also reportedly enjoyed fly fishing, bridge, and swimming.

Suzman has been praised by governments and institutions the world over and has received 28 honorary doctorates from the universities of Toronto, Glasgow, Oxford, Yale, Cambridge, Harvard, Columbia, Stellenbosch and Witwatersrand, among others. Her academic roots were acknowledged with an honorary fellowship from the London School of Economics.

She was twice nominated for the Nobel Peace Prize, and garnered a number of other accolades such as the United Nations’ Human Rights Award in 1978 and the Order of Meritorious Service in Gold in 1997, bestowed on her by then-President Mandela.

Zimbabwe’s contentious president Robert Mugabe declared her an “enemy of the state” in 2001, which pleased her immensely. In 1989 Britain’s Queen Elizabeth II made her a Dame of the British Empire.

Five years ago her old school, now known as the Holy Family College, honoured her with a rose garden. A granite plaque reads, “This garden honours her lifelong struggle for justice and human rights for all South Africans.” The Helen Suzman Rose, also known as Foxy Lady, grows in her garden. The flower is pink and dainty and was personally selected by Suzman because of her own petite stature.

Suzman published her autobiography, In No Uncertain Terms: A South African Memoir, in 1993, with the foreword written by Nelson Mandela.

Do you have any queries or comments about this article? Contact Janine Erasmus at janinee@mediaclubsouthafrica.com.