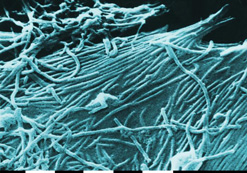 The ebola virus seen under a microscope.
(Image: Wikimedia) 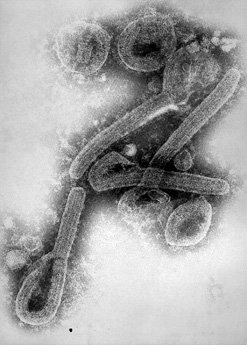 An amplified view of the Marburg virus,
which killed hundreds of people in Uganda
and Angola.
(Image: Wikimedia)

Health officials in South Africa have advised the public not to panic in the wake of a mystery disease that has killed three people, and possibly a fourth, in Johannesburg.

Melinda Pelser, a spokesperson for the upmarket Morningside Clinic, which treated the deceased three patients, says the symptoms of the disease causes external and internal bleeding and that it spreads speedily through bodily fluids.

The first death was a Zambian woman flown to South Africa in a critical condition for treatment on 12 September. Doctors treated the woman for tick-bite fever and other potential infections but she died two days later.

A Zambian paramedic who had accompanied her into the country died in the beginning of October and a nurse at the Morningside Clinic died on 5 October.

Some members of the deceased nurse’s family have been admitted to the hospital for purposes of observation, and as a means of taking extra precaution.

A cleaner who worked at the hospital and was in contact with those the three, also died on Monday 6 October in another hospital where she was being treated. Officials are still investigating whether the cleaner’s death was also related to the mystery disease.

So far tests conducted indicate that there are no signs that it’s airborne.

In a statement released by the health the department, South Africans were told there was no cause for panic as health officials are on high alert,

“The Department of Health would like to call on South Africans not to panic. Blood samples of three of the cases are negative for any particular disease, including Viral Hemorrhagic Fevers.

“At this stage the Department cannot confirm speculations linking these deaths to Ebola or any of the other viral hemorrhagic fevers,” the statement read.

Speaking to a Johannesburg-based radio station, Dr Frew Benson, the health department’s director of communicable diseases alluded to the fact that the mysterious nature of the disease was the biggest concern to health practitioners, “Our one concern is that we don’t know what we’re dealing with.”

Health officials are advising anyone with flu-like symptoms, accompanied by a high temperature, should contact their nearest hospital, specifically the Charlotte Maxeke Hospital (previously the Johannesburg Academic Hospital) and the Steve Bantu Biko hospital (previously the Pretoria Academic hospital) as both are specialist hospitals in a position to deal with the disease.

Those who have also travelled to Zambia and are experiencing the same symptoms were especially advised to treat it as a medical emergency and contact the health department immediately.

Authorities in Zambia, as well as the World Health Organisation, have started investigations into the unknown disease.

Leslie Mbula, Zambia’s High Commissioner based in Pretoria, says reporting coming from his home country indicate that except for the woman who was rushed to the South African hospital, no other person in that country has reportedly contracted the mysterious disease.

The disease has puzzled communicable disease experts as it displays all three flu-like symptoms similar to Viral Haemorrhagic Fever (VHF). Tests for several diseases, including VHF, have come back negative.

There are currently several strains of hemorrhagic fever, including the deadly Ebola and Marburg. The diseases cause bleeding from multiple sites and can have very high death rates.

Ebola is rare, but there is no known cure and the virus usually kills between 50% and 90% of its victims.

It is spread through contact with a patient’s bodily fluid. As with other hemorrhagic fevers, patients die from dehydration, bleeding, and shock.

According to the Centres for Disease Control and Preventions, viruses causing hemorrhagic fever are initially transmitted to humans when the activities of infected reservoir hosts and humans overlap.

The primary carriers of VHF causing viruses are rodents and arthropods. Other animals, which carry VHF, include the multimammat rat, the cotton rat and the deer mouse.

The specific signs and symptoms of VHF vary by the different types. But the initial symptoms often include fever, fatigue, dizziness, muscle aches, loss of strength, and exhaustion.

In cases where patients have a severe case of VHF, they will show signs of bleeding under the skin, in internal organs, or from body orifices like the mouth, eyes, or ears.

Although bleeding may be severe, patients hardly die from excessive blood loss. Some types of VHF are associated with renal (kidney) failure.

No vaccines currently exist to protect against VHF, with the exception of yellow fever and Argentine hemorrhagic fever, for which there are already vaccines.

Treatment is supportive for patients and prevention measures include avoiding close physical contact with infected people and their body fluids.

Other prevention methods include barrier nursing or infection control techniques such as isolating the infected individuals. Protective clothing must also be worn at all times when dealing with the infected patients.

Infection control methods also include the proper use, disinfection, and disposal of instruments and equipment used in treating or caring for patients with VHF, this includes needles and thermometers.

A number of African countries are not strangers to battling fatal hemorrhagic fever diseases.

The latest and milder Ebola outbreak in Uganda killed 37 people out of the 149 who were diagnosed. The second outbreak was contained and officially declared controlled in February.

The first Ebola outbreak in Uganda was eight years ago in 2000 and it killed more than 2000 people.

As Marburg continued to spread like wild fire, more people died and by November of that year, when Angolan authorities declared the country free of Marburg, 227 people had been reported dead.

Since the discovery of the mystery disease, the National Institute for Communicable Diseases has been working around the clock conducting tests to determine the origin of the highly contagious disease. Health authorities now fear that it may be a type of Congo fever.