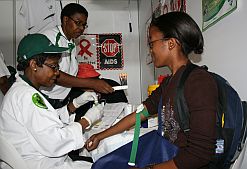 The government’s NHI will provide quality
healthcare for all South Africans. 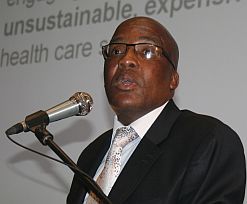 Minister Aaron Motsoaledi said NHI will be
funded by taxpayers. 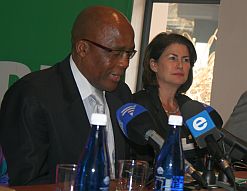 Motsoaledi and UK Commissioner to
South Africa Nicola Brewer at the briefing. 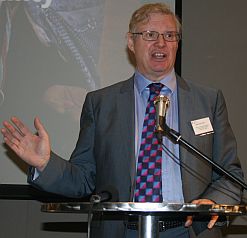 Work has begun to ensure that South Africa’s National Health Insurance (NHI) scheme kicks in by 2012, so that quality, affordable healthcare becomes a reality for all.

The government has adopted the resolution of the ruling party, the African National Congress, to phase in the NHI over 14 years as from 2012.

“The introduction of the NHI is not going to be an event, it will be a process,” said Minister of Health Aaron Motsoaledi at a media briefing in Kempton Park, east of Johannesburg, on 6 October 2010.

“We will introduce it in a phased and incremental manner,” he said.

The NHI is being designed to address disparities in healthcare access in the country. At the moment South Africans who can afford private treatment receive far better service than their poorer counterparts.

Motsoaledi said the government has always recognised that the quality of its healthcare needs urgent attention.

About 30 disadvantaged communities will be targeted for the first phase of the programme in 2012. “We’ve agreed that we’ll choose the poorest districts.”

According to the minister, the NHI will be funded by public taxes.

The government will enter into partnerships with private healthcare groups to revamp its public hospitals, he added.

Implementing goals of the health department’s Ten Point Programme is part of the NHI preparations. The programme, adopted in November 2009, identified the pressing need to revitalise public healthcare infrastructure, improve the quality of services and ensure better management, as well as seven other imperatives.

Lessons from the UK

The health department said it’s studying similar programmes elsewhere in the world to gain insight into how best to implement the system. On the same day as the press briefing, it hosted a knowledge-sharing workshop with representatives of the UK’s National Health Service (NHS), including its former chief executive Lord Nigel Crisp.

The NHS has been running for more than 60 years, and has weathered much political opposition lately. It’s the largest publicly funded national scheme in the world.

During his tenure Crisp was tasked by former prime minister Tony Blair to find ways of improving healthcare in developing countries, using UK expertise. “I believe this team will be able to deliver on time,” Crisp said of Motsoaledi’s leadership group.

The public-private partnership in improving facilities benefited both sectors in the UK, according to Crisp. The country’s government got companies to build its health institutions and then “used a mortgage system” to lease them.

All South African health institutions, public and private, will have to be accredited by a new body in order to be covered by the NHI. The government is working towards establishing an “Office of Standards Compliance” through parliament.

The body, which should be operational before the NHI’s implementation, will “measure our institution’s shortcomings and recommend improvements”, the minister said.

It will set quality standards for hospitals and clinics. “People have been spreading the rumour that the NHI is not going to care about quality or standards of healthcare.

“No health institution will be NHI-accredited without meeting certain quality standards,” Motsoaledi said.

Another body will be established to monitor the maintenance of standards by conducting ongoing inspections of healthcare institutions.

“We’ll need a system that will give responsibilities and consequences,” he added.

To retain its doctors and nurses, South Africa must offer better pay – as many opt to go abroad for higher salaries.

This challenge should be addressed before the NHI comes in, according to Motsoaledi. “We are paying urgent attention to issues of remuneration of health professionals to remove uncertainty …,” Motsoaledi said.

In addition to better pay, South Africa will also need to source more healthcare workers. The government announced recently that it will rope in foreign doctors and nurses to address this shortage.

South Africa has signed an agreement with the UK to ensure its health workers are not poached. Motsoaledi said the number of South African nurses practising in the UK has therefore dropped drastically over the years.

Similar deals with other countries, especially those which do not train their own nurses, are also being negotiated.