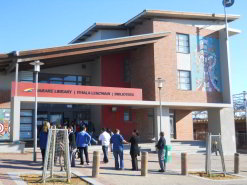 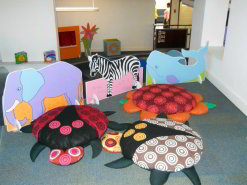 Children up to six years of age are given
a bright and cheerful environment in
which to learn.
(Image: Central Library, Cape Town)

The cutting-edge Harare Library, which serves the Cape Town community of Khayelitsha, opened to the public in June. Response to the new facility, said the City of Cape Town’s Library and Information Services Department, has been enthusiastic and positive.

Harare Library is just one component in the city management’s Violence Protection through Urban Upgrading (VPUU) plan, which is targeted at making Khayelitsha, one of Cape Town’s most poverty stricken areas, and a notorious crime hotspot, into a safe place for its residents.

Currently budgeted at R120-million (US$18-million), the VPUU is funded by the City of Cape Town, in partnership with the German Federal Ministry for Economic Development and Cooperation and Development, and the German Development Bank.

The programme is expected to take five years to complete, and will address issues such as lack of access to basic services, adequate schooling and economic opportunities, which are just a few of the factors that contribute to the instability of the area.

The VPUU, which was implemented in 2005, aims to tackle crime and violence by providing better social and commercial services, strengthening community structures, and getting residents more involved in their suburb.

The opening of the new library, which is designed to be eco-friendly with natural ventilation and efficient use of daylight, follows the creation of other public VPUU facilities in the suburb. These include two community buildings, a new park, and a school sports complex.

A Carnegie Foundation grant made it possible to stock Harare Library with quality content, in both print and digital formats.

Other exciting features of the library include a teen area with a giant chess board, a gaming room, free internet, and Wii consoles on which educational and fun activities can be enjoyed.

In just four days, said a City statement, more than 2 400 people had passed through the doors of the Harare Library.

Serving residents of all ages

At 1 800 square metres, Cape Town’s newest library is part of a multi-purpose centre that includes not only the library but also offices for community groups such as NGOs.

The modern facility provides normal services such as access to books, magazines, DVDs and videos, but is unique among libraries in the city in that it also has a specialised early childhood development centre, a computer centre with more public access computers than anywhere else in Cape Town, a study hall and a number of meeting rooms.

The early childhood development centre is known as Funda Udlale and caters for children up to the age of six. Toddlers are given access to books, soft toys, game facilities and educational computers, which allows them to learn specific skills and take part in role-playing.

The facilities are also available to crèches and day care centres in the area, who are encouraged to bring their children into a bright and stimulating environment. Also on offer for the tots are an artificial grass playing area and a blackboard that covers an entire wall.