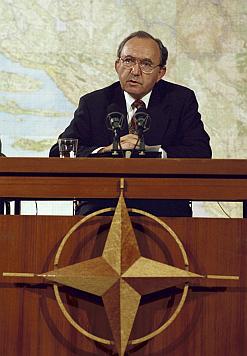 Justice Richard Goldstone makes an
address during a visit to Nato in 1996.
(Image: Nato)

South African judge Richard Goldstone, former Constitutional Court justice and chief prosecutor of the Rwanda and Yugoslavia tribunals, has been named as the second recipient of the prestigious MacArthur Foundation Award for International Justice. The award will be conferred on Goldstone in May 2009 in The Hague, seat of the International Criminal Court where he served from 2004 to 2006.

Former United Nations secretary-general Kofi Annan was the inaugural MacArthur Foundation Laureate, and received the award in March 2008. The MacArthur Foundation is a private organisation based in Chicago that awards grants to causes that focus on human and community development, global security and sustainability. The foundation makes endowments of about R67.2-billion ($6-billion) annually.

Making the announcement, foundation President Jonathon Fanton said, “For the second year, we have chosen someone present at the creation of the modern era of international justice, a distinguished jurist and legal scholar, a person whose clarity of purpose, fairness, and credibility is a force that inspires all who labour in special tribunals, regional human rights courts and the International Criminal Court itself. I am pleased to announce that the second recipient of the MacArthur Award for International Justice will be Richard J. Goldstone.”

Goldstone receives $100 000 for his own work, and the foundation also invites him to nominate a non-profit organisation of his choice for a donation of $500 000. The organisation must, however, be related to international justice issues.

Judge Goldstone is renowned at home and abroad not only as the former chief prosecutor of two important war crimes tribunals, but also as the chairperson of the Standing Commission of Inquiry Regarding Public Violence and Intimidation, which was also known as the Goldstone Commission.

The Goldstone Commission was effective from 1991 to 1994 and was set up by former President and Nobel Peace Laureate FW de Klerk to probe incidents of public violence and intimidation in South Africa prior to the country’s first democratic general election in 1994.

The uncertain years before the advent of democracy were plagued with violence and the Commission is widely acknowledged as having played a critical role in mitigating the unrest. The Committee could not establish conclusively that the political violence was fuelled by a third force “existing as a sinister and secret organisation orchestrating political violence on a wide front”. It did, however, openly name the police force and army as major contributors to the violence.

“His wise and even-handed direction of the Commission proved invaluable to the democratic transition in that country, where he served also as an inaugural member of the Constitutional Court,” commented Fanton.

Goldstone later served for two years as chief prosecutor of the United Nations International Criminal Tribunals for the former Yugoslavia and for Rwanda, becoming the first prosecutor to assume joint responsibility for both. These were the first courts of their kind since the trials of Nazi war criminals after World War II. Judge Navanethem Pillay is South Africa’s present representative on the bench – she is assigned to the Appeals division.

Fanton described Goldstone’s work on the tribunals as a “mature, meticulous, and measured exercise of that mandate”, which brought welcome resolution to victims and established a new model for the prosecution of crimes against humanity.

Goldstone currently sits on the board of directors of the International Centre for Transitional Justice, an organisation that assists countries seeking justice for past mass atrocity or human rights abuse. The Centre’s board is chaired by its founder Dr Alex Boraine, another distinguished South African legal professional.

Goldstone also holds directorships of humanitarian organisations such as Physicians for Human Rights, Human Rights Watch, and the Massachussetts-based Brandeis University Centre for Ethics, Justice, and Public Life. He is a foreign member of the American Academy of Arts and Sciences and an honorary member of the New York Bar Association, among others.

Author of numerous articles on international humanitarian law, Goldstone has been honoured by a multitude of organisations from all over the world, and holds 17 honorary Doctorate of Law degrees from renowned institutions such as the universities of Notre Dame, Cape Town, British Columbia, Glasgow, and Calgary. His memoir For Humanity: Reflections of a War Crimes Investigator was published in 2000.

Goldstone recently announced that he will spend three months in The Hague as the first The Hague Peace Philosopher. He anticipates his tenure to run from early April 2009.

The Peace Philosopher is an initiative supported by the Spinoza Fellowship, which is a partnership between the municipality of The Hague, the Netherlands Institute for Advanced Study in the Humanities and Social Sciences, Radio Netherlands Worldwide and Leiden University’s campus at The Hague. It is expected that a new Peace Philosopher will be selected every year to work on issues relating to international peace.

Goldstone will focus his efforts on a new convention on crimes against humanity but will also give readings and interviews, lead debates, and hold master classes, as well as produce several publications for Radio Netherlands Worldwide’s International Justice website. These will all relate to his major theme: the growing cohesion between international humanitarian law and international human rights.