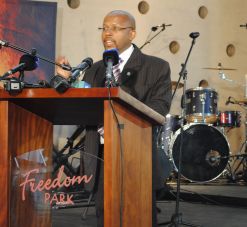 Sello Hatang, CEO of the Nelson Mandela Centre of Memory, posed several questions to South African citizens to judge whether we are truly a socially cohesive society.
(Images: Ray Maota)

Who better to address issues concerning women, than women themselves?

On a sunny 17 August morning at Freedom Park in Tshwane, 250 people, mostly women, gathered to discuss pertinent issues such as how gender equality can help build social cohesion.

Prof Njabulo Ndebele, chairperson of the Nelson Mandela Centre of Memory and current chancellor of the University of Johannesburg, opened proceedings, saying: “South Africa occupies a unique space in Africa and globally, as an example of a country that emerged from the morass of deeply rooted racial, cultural and political divides – primarily because of timely dialogue between all its stakeholders.”

Ndebele added that that dialogue is fundamental to the legacy of Madiba – the clan name for Nelson Mandela – and to South Africa’s transition from apartheid to democracy.

“He based his entire life on the principle of dialogue and the art of listening and speaking to others; it is also the art of getting others to listen and speak to each other,” said Ndebele.

Bikitsha added that we cannot have cohesion when inequalities based on gender or otherwise still exist in our society.

Yolanda Mabusela, member of the mayoral committee for health and development in Tshwane, said: “Social cohesion has been described by our president Jacob Zuma as the extent to which a society is coherent, united and functional, providing an environment where citizens can flourish.”

South Africa held a National Social Cohesion Summit at the Walter Sisulu Square of Dedication in Kliptown, Soweto, in 2012.

At that summit discussions took place on the role of organs of state such as the judiciary, Parliament and other legislative bodies and political parties, as well as the role of civil society, including business and labour, and other NGOs such as the Foundation for Human Rights, Molo Songololo and Lead SA. The aim was to figure out how to make social cohesion possible.

Ndebele said: “Around the globe, gender equality has made huge strides over the last few decades. This includes South Africa. However we still suffer from some very strong and outdated attitudes towards differences in genders and the rights of men or women.”

Ndebele lamented the fact that levels of gender-based violence are still unacceptably high in South Africa, and also that inequalities in terms of employment, education and opportunity are experienced daily.

“I’m a Nubian, one of the oldest cultures in Africa, but that doesn’t mean that there is nothing wrong in our values regarding women in our culture,” said Ibrahim.

He said we needed to look within our cultures first to figure out how they will foster social cohesion of women.

With dignitaries at the event, Haffajee started her talk by saying “No protocol observed”, to much laughter from the audience.

She explained why: “One of the things that impacts on our social cohesion is these groupings of people into VIP or VVIP, which builds walls around people by ranking them in importance.”

She added that a generational shift in leadership in South Africa is needed, citing Barack Obama, who became US president at 47 years – but she did praise quotas that have made South Africa one of the top countries in terms of women’s empowerment

The women in leadership census found that women hold 35% of all senior managerial positions in the country’s public service.

Haffajee said: “With us living in the Selfie Generation, where it’s all about the individual, it’s becoming harder to achieve social cohesion.”

Mohamed added that social cohesion depends on the decisions we make daily that affect the society around us.

Democratic Republic of Congo (DRC) national Bulambo became emotional when describing how women in parts of her country were largely exposed to rape, and gender equality was practically non-existent.

Bulambo called on women to find common ground – “Let us find things that bring us together as women.”

Machel was teary-eyed when she said: “Efforts by the UN Security Council to see a decrease in rape in the DRC had not yet yielded any success.”

Bulambo urged South Africans to start including and considering refugee women in their communities and economy.

Machel said: “Recently I read that there was a report saying 47% of children have fathers who do not live with them and 51% of them were from black households.”

She added that this means the family structure in this country has changed, while the laws being passed still make it look like all families are nucleus.

This has an effect on social cohesion because woman now bear the brunt of raising the children but at a lesser income than their male counterparts.

Haffajee said that when democracy came in 1994, the people of South Africa chose to be a party nation.

“We decided to look away from burning issues in society and party our sorrows away,” she said.

She added that the born-free generation, those that were born in 1994 and later, will be the one to help us look deeper into these issues.

Sello Hatang, CEO of the Nelson Mandela Centre of Memory, closed the session by posing questions to the audience.

He asked whether we can claim to be a socially cohesive nation if: women can’t walk freely without fear of violence; women are not paid the same as their male counterparts; refugees fear xenophobia; and children have to have sex with older men in order to survive?

“Till these questions are answered we then still have a lot to do as a nation,” he said.