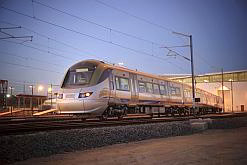 From 1 July the Gautrain will start
operating between Hatfield in Pretoria
and Park Station in Johannesburg.
(Image: MediaClubSouthAfrica.com. For
more free images, visit the image library)

South African motorists say they are looking forward to leaving their cars at home and travelling between Pretoria and Johannesburg on the speedy Gautrain, once it begins operating along that route from 1 July 2011.

The train will travel between Hatfield in Pretoria and Park Station in Johannesburg.

Johannesburg and Pretoria are the biggest cities in Gauteng province, with more than 157 000 cars travelling along the N1 Ben Schoeman highway between the two centres daily. This makes it the most congested route in the country.

The aim of the Gautrain is to cut the number of vehicles on the N1 Ben Schoeman highway and provide a viable mode of public transport as an alternative for commuters.

“I hate spending hours in the traffic when I could have been using that time catching up on some work or sleep,” said David Richter from Johannesburg. “I drive my car from Johannesburg to Pretoria for work every day and it really takes its toll on me. I really look forward to the Gautrain starting to operate so I don’t have to sit for hours in the traffic every day.”

It can take motorists about two hours to make a single trip between the two cities, at a cost of about R61 (US$8.9). “With the petrol price constantly increasing you end up spending all your money on just filling up your tank,” said Colin Liebenberg from Pretoria. “Having an alternative means of transport will be really great for us. It’s about time we had a good, reliable public transport system in our country.”

Gauteng transport MEC Ismail Vadi said he believes the Gautrain prices will attract motorists to shift from private car use to the rapid railway system. A single trip between Pretoria and Johannesburg will cost R39 ($5.6) for a monthly ticket holder, he said.

This is almost half of what it currently costs motorists to use their own cars. “The Gautrain will be able to transport commuters every day in all directions, providing economic mobility and the convenience of door-to-door commuting,” Vadi added.

Mduduzi Nene from Pretoria said the new service will be a big saving for him. “I will be spending less money on my daily travels and servicing my car, as I will not be using it as often. The government is also planning to introduce toll fees on the Johannesburg-Pretoria route later this year – that’s an added expense if you’re travelling with a private car, but with the Gautrain you’ll make a once-off payment on your monthly ticket and you’re set.”

Gauteng Premier Nomvula Mokonyane said: “Currently, congestion is a major threat to the development of the province where traffic volumes grow at a rate of 7% per year on the main corridor between Johannesburg and Pretoria.”

Currently, most South Africans who have their own cars would not choose to use the country’s public transport system, as they view it as being poorly maintained and at times unsafe and unreliable. Minibus taxis are the most popular means of transport in the country, followed by buses.

The Gauteng transport department believes the Gautrain is the catalyst the country needs to make public transnport a mode of choice for commuters, including those who have the means to purchase and use a private vehicle.