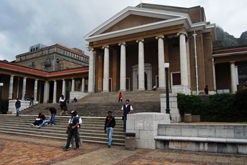 Since 1994, the Department of Education has built 153 primary schools, and 128 secondary schools. In addition, more than 7 069 classrooms were built in existing schools to meet an increased demand for schools in the province; 11 946 toilet seats were also provided. (Image: mediaclubsouthafrica.com)

The Gauteng Department of Education‘s 20 Years in Review conference, held at Turffontein Racecourse on 15 April, reflected on improvements in public education in the province since 1994. Attended by some 700 education professionals, including members of school governing bodies, teachers, principals and other interested parties, the conference was based on an independent review conducted into public schooling in Gauteng from 1994 to 2014. The department commissioned researchers at the University of the Witwatersrand’s School of Education to conduct the review in 2013.

The review covered how education in the province has changed since 1994, its current state, and what has been achieved in the sector over the past 20 years. The conference also addressed challenges yet to be tackled and shortfalls in the sector, and the department’s priorities for the future.

“We thought it prudent that as we celebrate 20 years of democracy in our country, we should use this time to reflect on the gains made and the road ahead,” said Gauteng Education MEC, Barbara Creecy.

Creecy added, “How far we have come becomes clear if we turn the clock back 20 years from 1994 as a mirror to today. Systems differed for white, African, Indian and coloured children, with curricula for African children particularly designed – in Verwoerd’s [prime minister of apartheid South Africa from 1958 to 1966] words – to produce the ‘hewers of wood and drawers of water’ that white South Africa required to do the hard and dirty work.”

According to the review, the department’s achievements include:

• The number of children in special schools growing by 65%, from 25 515 in 1994 to 42 058 in 2014. A special school is one not categorised as an ordinary school – these include schools for children with disabilities and those offering specialised education.

• The increased recruitment and distribution of teachers, from 44 020 across the public school system in 1995 to 54 803, to meet the challenges of increasing pupil numbers.

Since 1994, the Department of Education has built 153 primary schools, and 128 secondary schools. In addition, more than 7 069 classrooms were built in existing schools to meet an increased demand for schools in the province; 11 946 toilet seats were also provided.

Creecy added: “We also built 300 administration blocks, 204 media centres, 443 multi-purpose classrooms and 1204 computer centres to ensure that incomplete schools were provided with the necessary structures to ensure that they become fully functioning schools.”

Since 1994, the department has also built 611 Grade R classrooms in existing schools to support the universal rollout of Grade R across the province.

The MEC also pointed out that the flow-through rate of Gauteng students is the best in the country. The flow-through rate measures how many pupils stay in school from Grade 1 through to Grade 12. The flow-through rate in 2013 was 63%, compared with 42% in 2006. She said, “All of these successes must be seen against the backdrop of a growing number of no-fee schools and this means, in practical terms, that education is free for the majority of our children in Gauteng public schools.”

Creecy identified three areas to focus on in the future: teacher development; a social plan to address issues such as bullying, school violence and ill-discipline; and school governance, including improvement training for governing bodies.

She concluded by saying, “Twenty years on we are celebrating 20 years of freedom, reflecting on what we have achieved. It is time to understand that education is a right and not a privilege.”