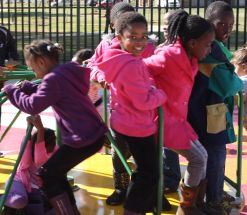 Children are set to parade the streets of Yeoville in celebration of Africa’s legacy at the Gauteng Children’s Carnival.
(Image: Play Your Part)

The start of spring after a long, cold winter will be marked with a celebratory carnival, which will also reference the vibrant history and culture of South Africa. Schoolchildren from across the province will participate in the third annual Gauteng Children’s Carnival through Yeoville on Saturday, 7 September.

In all, 90 schools are participating. The carnival will be centred at Yeoville Boys Primary School, but the children will put their creative skills on show in a parade through the suburb’s streets in costumes of their own making. The Children’s Carnival is part of the build-up to the Road to Gauteng Carnival, scheduled for December. It will expose not only South African arts and various cultures, but those from around the continent. In this way, it will help to end xenophobia by exposing the youth to other people.

It aims to enforce the feeling that Africa is one community, and to help African nationals hailing from all corners of the continent integrate into local spaces. It will also spread unity among the diverse groups of young people.

Yeoville was previously known for its energy and artistry, all of which will be brought back to life by the children and their colourful, extravagant costumes. The theme is “Celebrating Africa’s Legacy”. Given that Yeoville has such a large African community, the carnival organisers identified it as the perfect venue to make as big an impact as possible.

Organisers hope it will help to strengthen social cohesion and return the suburb to its former splendour. Another aim is to highlight the importance of education and to use this day of fun and games to encourage participating children to pursue their dreams of one day becoming world-class professionals in the fields of their choice.

Festivities will begin at 10am and end at 4pm, starting with a 2.3km walk, the route of which will be painted in bright colours. Among those who will attend are Trevor Fowler, the Joburg city manager, and Boy Ngobeni, the head of the Gauteng department of education, as well as representatives from SA Breweries, which is working alongside the National Youth Development Agency and the Department of Trade and Industry on the You Decide campaign.

You Decide is aimed at educating the youth and building awareness about the dangers of alcohol consumption and abuse at a young age.

About the carnival, Lebogang Maile, the MEC of sport, arts, culture and recreation, says: “The Gauteng Children’s Carnival is more than fun and more than showcasing talent; it is also a means to urge youth’s interest in education using the arts. It is about telling the youth to remain in school while pursuing their talent or ambition, especially within the entertainment industry. It is also about celebrating Africa’s heritage and creativity. The learners don’t only participate on the day but get involved in the creation of the costumes, music and dance.”

The interest from local leaders such as the area’s ward councillor, Sihlwele Myeki, has led to an additional number of children from Yeoville and surrounding areas being allowed to join in on the action this weekend. Music will be provided on the parade by DJs performing on flatbed trucks. They are the finalists of the 2012 Gauteng Carnival DJ programme, held to unearth musical talent.

Children will also be involved in the hip-hop programme at Yeoville Boys Primary School, in which they will compete in activities such as such as emceeing, poetry, graffiti and dance. It will take place after the parade, and marks the end of the Dance to your Rhythm project aimed at high school pupils who have a passion for all things hip-hop.