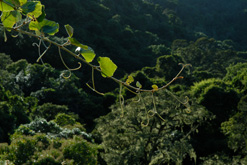 South African forests, such as that found
in the Tsitsikamma National Park, are
spectacular centres of biodiversity, with
hundreds of different species of trees, and
a good many more species of herbaceous
plants, forming a thick, tangled and wild
understory.
(Image: Rodger Bosch,
MediaClubSouthAfrica.com.) 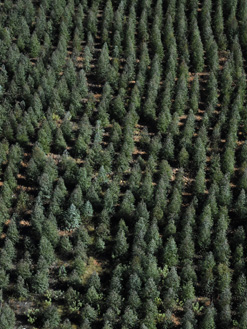 Plantations almost always consist of only
one species of tree planted in straight
rows. And underneath the trees virtually
nothing grows.
(Image: Graeme Williams,
MediaClubSouthAfrica.com. For more free
photos, visit the image library.)

The FSC is a not-for-profit organisation established to promote the responsible management of the world’s forests. It is a member-driven organisation, and the general assembly, which meets every three years, is its highest decision-making body. The 2008 assembly was the first to be held on the African continent.

The aim of the FSC is to ensure sustainable forest use by accrediting and certifying forest products that have been grown and manufactured in a way that complies with specified environmental, financial and social criteria.

One of the main aims of the general assembly was to restructure global certification standards to be appropriate to all countries of the world. For many South African members, this was the most important function of the assembly.

Until now, the FSC has had one set of standards that is applicable worldwide, but this has been hotly disputed – particularly by people and organisations in the southern hemisphere and tropical regions.

One of the main points of conflict was the fact that FSC permits certification of plantations using the same criteria that apply to natural forests.

In South Africa particularly, this has caused an absolute uproar. Civil and environmental organisations Timberwatch and Geasphere held a meeting in Cape Town prior to FSC’s assembly to protest vigorously against the certification of plantations. At issue were the many negative environmental and social impacts of monoculture plantations in South Africa.

Monoculture plantations, which in South Africa are usually alien pine or eucalyptus, drastically reduce the water table, threaten biodiversity, and contribute to soil erosion. Their many negative social impacts include loss of access to traditional medicines, deterioration of subsistence agriculture due to falling water tables, and health problems caused by pollution of water and air by sawmills and other processing plants.

In the face of these arguments the seemingly obdurate insistence by FSC to continue to allow the certification of plantations made no sense at all.

But the voice of dissent did not fall on deaf ears. As John Scotcher, forestry consultant and FSC’s South African representative, says, “One of the most important items on the agenda is the recognition of the differences between natural forests and plantations, and the development of appropriate indicators and standards that reflect these differences.”

In South Africa, a short-sighted child could tell the difference between a forest and a plantation with one glance out the car window at 120 km/h.

South African forests are spectacular centres of biodiversity, with hundreds of different species of trees, and a good many more species of herbaceous plants, forming a thick, tangled and wild understory.

Forests buzz with life. Iridescent birds such as the narina trogon and the Knysna turaco flash their bright plumage as they flit from branch to branch, and an enormous number of different animal species – ranging from the tiniest insects and frogs to elephants – make the forests their home.

Plantations in South Africa, on the other hand, almost always consist of only one species of tree planted in straight rows. And underneath the trees virtually nothing grows. Plantations are boring, monotonous, green deserts that suck up enormous amounts of groundwater and lend a monochromatic tone to what were once beautiful, diverse landscapes.

But they are also useful. We need timber for construction, furniture and mine props, and – despite the much-heralded but still awaited paperless office – we need paper.

Less diversity in the north

“But things are different in the northern hemisphere,” explains Scotcher. ‘In stark contrast to our tangled forests, the natural forests of, for example, northern Europe consist of less than a dozen tree species, of which about seven or eight are commercially exploitable.

“So, if it were possible to obtain an easier certification for plantations, European timber growers could simply destroy all the trees of no commercial value and turn every forest into a plantation , albeit of mixed species.

“The main concern of certain groups is that plantations are not forests, and therefore a different set of principles and criteria would be needed for each.”

Schotcher points out that the FSC does not usually allow plantations that have been established on clear-felled indigenous forests after 1994 to qualify for FSC certification. And that this would, in any case, be an unlikely event in South Africa as all natural forests are protected by the National Forests Act.

The National Forests Act includes natural forests, plantations and woodlands under the definition of forests. So there is no legal distinction between plantations of alien trees, like pine or eucalyptus, and forests like those at Knysna, in Tsitsikamma on the wild coast, in the Amatola Mountains and in the wilds of Magoebaskloof.

“In May 2005,” Scotcher says, “a National Initiative Working Group was established to oversee the setting of appropriate certification standards in South Africa through the appointment of consultants.

“The working group is made up of 12 people consisting of three representatives from the forestry industry, three from environmental organisations, three from social interest groups, and three from the Department of Water Affairs and Forestry.

“In November 2007,” he continues “the Institute of Natural Resources at the University of KwaZulu-Natal was appointed by the working group to develop certification standards for both natural forests and plantations. In March 2008, the first round of stakeholder consultations was implemented through the holding of public meetings.

This is due to be followed up by a second round of meetings towards the end of November 2008. These will be held in the Western Cape, the Eastern Cape, KwaZulu-Natal, Mpumalanga and Limpopo.

In addition to these, there will be focus group meetings with community leaders, landowners, forestry industry representatives, environmental organisations and other stakeholders.”

Plantations, on the other hand will be judged by, among other things, their proximity to watersheds, fire management and the control of weeds – both weeds growing up within the plantations, and the escape of plantation trees onto neighbouring land.

In both cases, fair labour practices and financial and social responsibility will be taken into account when certifying enterprises.

Of course, it’s not just the growing of trees for timber and pulp that needs to be certified.  Sawmills, pulp and paper mills, and other networks associated with production can also be certified through the chain-of-custody process.

It’s a really complex process, and it’s impossible to ensure absolutely no impact whatsoever but, when you buy a wooden table or a ream of paper with the FSC logo on it, you can be assured that – as far as possible while maintaining financial viability – all reasonable steps have been taken to minimise any negative impact on the environment and the communities living close by.