Father Michael Lapsley came to South Africa from New Zealand as a young man. In his adopted home, he could not ignore the horrors of apartheid. For his contribution to peace and reconciliation, he was recently named the recipient of the Public Peace Prize 2016 in the category “Global Peace and Reconciliation – Internationally Reputed Peacemaker”. 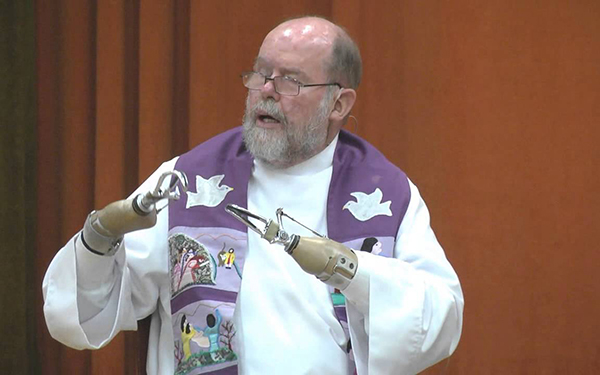 “I have travelled the journey from being a freedom fighter, to being a healer,” said Father Michael Lapsley, recipient of the Public Peace Prize 2016. “And in some small measure, my journey reflects the journey of South Africa.

“There was a time to slay the monster of apartheid. But now that we have democracy, it is time to heal, to reconcile, to rebuild.”

Born in New Zealand in 1949, he came to South Africa when he was 24 years old. Once here, seeing the injustices of apartheid, he became involved in the struggle for freedom.

“He went as far as accepting to become the ANC’s [African National Congress] chaplain, a position which exposed him to every danger,” reads the Public Peace Prize website. He became a marked man because of his involvement in politics, and for this he received death threats.

To be safe, Lapsley first went into exile in neighbouring Lesotho, and then in Zimbabwe. In 1990, he received a letter bomb in the post. When he opened the parcel, he lost his hands, an eardrum and an eye.

Lapsley returned to South Africa after the fall of apartheid and took part in the Truth and Reconciliation Commission (TRC), alongside Archbishop Desmond Tutu.

Posted by The Institute for the Healing of Memories- North America on Monday, January 25, 2016

The journey to healing

After contributing to the TRC, and later to the Centre for Victims of Violence and Torture, he set up the Institute for Healing of Memories in 1998.

“Through his own experience of living in exile, losing both hands and an eye in a letter bomb attack in 1990, and listening to the stories of the survivors whom he counselled at the Trauma Centre, Father Michael realised the importance of giving people a space in which their experiences could be shared and acknowledged,” reads the institute’s website.

“At the time of South Africa’s TRC, it was clear that only a fraction of all South Africans would have the opportunity to tell their story before the commission… It was felt by many that additional platforms were needed to enable all those who wished to share their experiences and be heard compassionately.”

Lapsley started “healing of memories workshops” which ran alongside the TRC to support victims of apartheid violence.

“The purpose of the workshops was to facilitate reconciliation between different racial groups and to heal emotional wounds, in order that individuals might contribute positively towards the reconstruction of South Africa,” reads the website. “The workshops were also used to give further support to those who testified before the commission.”

Watch this for more:

Healing workshops have since spread to other countries, such as the USA, Rwanda and Sri Lanka.

The methodology used in the workshops has also been expanded to be used in various scenarios, such as with survivors of domestic abuse, teenage prostitution, prison wardens and offenders, refugees and people affected by HIV/Aids.

Working with Stephen Karakashian, Lapsley wrote the memoir Redeeming the Past, My Journey from Freedom Fighter to Healer.

“Michael’s life is part of the tapestry of the many long journeys and struggles of our people,” said Nelson Mandela, while author Nadine Gordimer described the book as “a uniquely alive, wonderful narrative”.