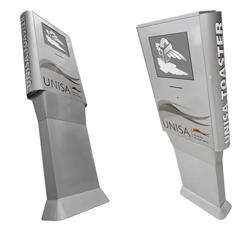 Unisa’s branded Toasters have been
installed in registration offices around
South Africa to provide students with
their courseware in digital format.
(Image: Breadbin Interactive)

One of the largest distance-learning institutions in the world, the University of South Africa (Unisa) has introduced an innovative open source software platform known as the Freedom Toaster to supply educational material to its students.

The Freedom Toaster concept was developed by Jason Hudson, former technical product manager and portfolio manager for the Shuttleworth Foundation, a funding and development organisation founded in 2001 by South African entrepreneur Mark Shuttleworth. The organisation believes that innovation is the key to improving the quality of education, which in turn will unlock the creative potential of young South Africans.

With support from the Shuttleworth Foundation, the Freedom Toaster was initially launched in 2005 as a convenient way for open source enthusiasts to obtain Linux distributions and free software, images and music without having to struggle with South Africa’s often slow internet download speeds and high cost of bandwidth.

A vending machine in principle, the Toaster allows users to conveniently select free and open source software through a touch screen interface, copy it to a CD, DVD or USB flash drive and then simply take it away with them.

The device’s name comes from the fact that open source software is mostly free, and that in Linux terms a CD burner is known as a toaster.

Hudson now heads up Breadbin Interactive, the company driving further development and marketing of the product.

Brett Simpson, MD of Breadbin and another former Shuttleworth Foundation developer, says, “We both cut our teeth at the Foundation and both wanted to start a business so we were lucky enough to be asked by Mark Shuttleworth if we wanted to see if we could take the project from philanthropic into self sustainability.”

Two years on, the new software and hardware is ready for the market, says Simpson. Breadbin is one of 15 entrepreneur-run companies that are being nurtured by the VeloCITI Business Acceleration Programme of the Cape Information Technology Initiative.

Unisa is using the Toasters, re-branded as Unisa Toasters, to supply their students with course material. A number of Toasters have been installed in Unisa’s registration offices around the country and the full curriculum is available in electronic format. Because the Toaster is driven by open source coding it was possible to customise it exactly to Unisa’s needs.

Louise Schmidt, director of Unisa’s corporate communication and marketing division, says that although there is an increasing global trend towards supplying students with courseware in digital format, in Africa this is not always possible because of connectivity problems and the fact that many households do not have access to the necessary technology.

“The Unisa Toaster helps us to bridge the divide and provide digital content to students who do not necessarily have internet access, or enough bandwidth available to download resources,” says Schmidt.

Registered Unisa students simply enter their student numbers into a Toaster, which then brings up a list of their courses and associated material available for download. The students select the required material and copy it to CDs, DVDs or flash drives.

“Our initial plan was to gauge the interest of students to receive digital material,” says Schmidt. “The 2007 pilot was a success and we are now launching it to all registration centres in order to assist students to have their study material immediately upon registration, saving them having to wait for material to arrive via conventional mail.”

Simpson adds: “Unisa has done amazing work with its Toasters and is leading the way in terms of digital courseware and general content distribution at universities.”

The university has taken delivery of 30 Toasters and has another 31 on order.

According to a report on Techleader.co.za, the Western Cape education department has also jumped on the toasting bandwagon. The department has adopted a mobile version of the Toaster that visits schools with the aim of boosting awareness and understanding of the benefits of computers and technology in furthering education.

A model of distance education