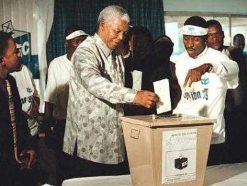 Nelson Mandela casting his vote in 1994. 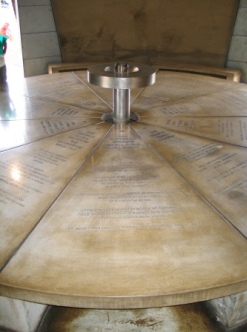 This year, South Africa celebrates 19 years of freedom, with this freedom marked in April. It is vital that every South African – the apartheid survivors and the born-frees – know the history of the freedom struggle.

Freedom Day is observed on 27 April, a national public holiday. On this day in 1994, the country held its first non-racial democratic elections that ended 300 years of colonialism, segregation and white minority rule, and established a new democratic government led by Nelson Mandela and the African National Congress (ANC).

It is recorded in South African history as a day that paved the way towards a new democratic dispensation and a new constitution.

Another, earlier, milestone on the march to freedom in apartheid South Africa came in the form of the Freedom Charter, a unique document that allowed the people of South Africa to be actively involved in formulating their own vision of a different society. In it, the existing order of oppression and exploitation that dominated the 1950s was entirely rejected.

The Freedom Charter was significant because it embodied the hopes and aspirations of black people in South Africa at that time. Its opening words became widely known and still hold a powerful position in South Africa’s political discourse: “We, the People of South Africa, declare for all our country and the world to know: that South Africa belongs to all who live in it, black and white, and that no government can justly claim authority unless it is based on the will of all the people.”

It was first proposed at the annual assembly of the ANC in August 1953. Professor ZK Mathews formally suggested convening a Congress of the People to draw up a Freedom Charter.

In 1955, these allies sent out 50 000 volunteers into townships and the countryside to collect what they called “freedom demands” from the people of South Africa – this system was designed to give all South Africans equal rights.

Demands such as sharing the wealth of the country and adequate housing, education, and health care for all were then synthesised into the final document by Congress of the People leaders including Mathews, Lionel Bernstein and Alan Lipman.

‘The people shall govern’

The Freedom Charter was officially ratified on 26 June 1955 at a Congress of the People meeting in Kliptown near Johannesburg. The meeting was attended by about 3 000 delegates but was broken up by police on the second day, although by then the charter had been read in full.

The crowd had shouted its approval of each section with cries of “Africa!” and “Mayibuye!”, a Zulu word meaning “bringing back what was lost”. Over the next four decades, the charter came to represent ANC policies formulating basic demands for human and political rights that had been included in previous petitions.

“South Africa belongs to all who live in it” and “All shall be equal before the law” are other well-known and oft-repeated declarations in the charter. It pledged to continue the struggle until a new democratic order was put in place, and called for democracy and human rights, land reform, labour rights, and nationalisation.

After the congress was denounced as treason, the apartheid government banned the ANC and other parties, and arrested 156 activists, including Mandela. However, the charter continued to circulate in the revolutionary underground and inspired a new generation of young militants in the 1980s to join Umkhonto we Sizwe (MK).

Translated as “spear of the nation”, Umkhonto we Sizwe was the armed wing of the ANC and was co-founded by Nelson Mandela in the early 1960s. MK soldiers took up arms against the apartheid government, both at home and in exile.

On 11 February 1990, Mandela was finally freed and the ANC came to power in May 1994 after the elections that April. The new Constitution of South Africa, drawn up through multi-party talks between anti-apartheid groups and the government of the time, that began with Codesa (Convention for a Democratic South Africa) in December 1991, included in its text many of the demands called for in the Freedom Charter. Nearly all the concerns regarding equality of race and language were directly addressed in the Constitution.

The first non-racial election marked the end of years of struggle. It came after a tumultuous few years in the beginning of the 1990s. Liberation organisations were unbanned; political prisoners were released; exiles returned; negotiations and talks were held between previous foes, ending in the formal all-party negotiations in which an interim constitution was drafted.

Though there were threats of political violence, the elections took place in a peaceful and festive atmosphere. They were contested by 19 political parties – a huge jump from the three main parties of apartheid South Africa, namely the ruling National Party, the official opposition Conservative Party (CP), and the Democratic Party (DP).

The main parties in the election were products of political formations that were significant in the years leading to 1994. They include the ANC, Inkatha Freedom Party, the NP, the DP, the Pan Africanist Congress and the Azanian People’s Organisation.

Today, the Bill of Rights is a cornerstone of democracy in South Africa as it protects the rights of all people in the country and upholds the democratic values of human dignity, equality and freedom. The country’s first bill of rights was restricted in chapter three of the transitional constitution of 1993, which was drawn up as part of the negotiations to end apartheid. The interim bill of rights, which came into force on 27 April 1994, was limited to civil and political rights.

The current Bill of Rights, which replaced the interim one on 4 February 1997, retained all of these rights and added a number of new positive economic, social and cultural rights. The Bill of Rights is briefly summarised in the following statements:

Children under the age of 18 have special rights, like the right not to be abused.

A more detailed explanation of the Bill of Rights is available online.